Last Wednesday I went to Mavericks for the first time ever.

If you’re from Santa Cruz, you don’t need an explanation.

In some ways I’m ashamed to admit this as a native Santa Cruzan.  But really, in all honesty, after living here off and on for 24 years, I like to save some places so I might have a chance to discover them later.  Mavericks was one of those places and since I don’t surf, nor do I swim in the ocean (sorry to anyone who resents me for living four blocks from the most beautiful ocean in the world), I’ve really never felt the need to make an effort to go there.  But last Wednesday Jeff the fabulous idea to take me – to watch the sunset and the huge swell roll in.  Of course we both simultaneously also had the idea to get dinner afterward at Pasta Moon (http://www.pastamoon.com/)  because we both think like that, and besides, it would be a wasted trip to Half Moon Bay if we didn’t get some great food out of the deal.

The Mavericks sunset on January 13 was the most surreal sunset I have ever seen in my life.  It was like a Salvador Dali painting set in motion.  The photos here, I took with my iPhone. 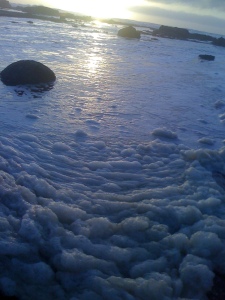 I wish I had had my camera but honestly it would have been stuck to my face the whole time and I would have missed out on the real thing.  This was one of those life experiences that cannot be truly appreciated by anyone except for those who were actually there experiencing it.

I wish I could share it adequately but unfortunately I cannot.  I am sure not even going to try and recapture it with words because as far as I’m concerned, even a crappy a photograph could do a much better job at describing such a thing than I could with any sort of “words.”  (https://enotecamarcella.wordpress.com/2010/01/04/why-i-started-this-blog/) 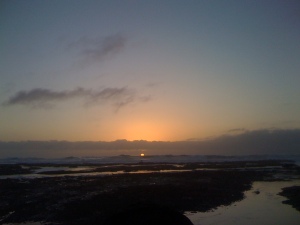 (This was the best scene in person. After the sun squeezed itself out from under that top layer of clouds, it silver-lined them all, and then plunged its yellow-disk-self down into the crashing waves, which also somehow appeared to be above us. One lone bird stayed perched atop of a rock, barely seen in this photo just under the sun.)

By now you’re asking “What the hell does this have to do with Piedmont!?”  Or maybe you’re not.  But it does!  Fortunately for me, Pasta Moon has a great by-the-glass wine list, which included on this evening both a white and a red from my beloved Piemonte.  So I got to sip on these while coming down from my Mavericks Sunset Trip.

Ceretto B’Langhe 2007. Roero Arneis. First aromas of lemon, opening to pear, hay, and the smell of ice. Prickly in the mid-palate finishing with pear fruit and a hint of light smoke. ★   The first time I ever had this wine, man did I love it!  I was at Rancho Cellars in Carmel on April 12, 2005 and it was perhaps the first time I tasted so many Piemonte wines at once, thanks to my friend, Will, who used to work there and let me know about all the cool tastings going on.  (Wow, there really is a good reason I save all my wine notes!)  What I got on that date out of the 2003 vintage was (and this could very well have been the first Arneis I ever had): a peculiar nose with clean mint, gooseberry, and mineral, fizzy in the middle, and a warm citrusy finish with good acidity, nuts, and steel.

Marchesi di Gresy Monte Aribaldo 2007. Dolcetto d’Alba.  You know, I see Marchesi di Gresy all over wine lists here in California and I’m a little skeptical because I’ve never visited this place…but I ordered it anyway, and was glad I did.  I immediately was captivated by the aromas I typically love in a Dolcetto: fruitcake, fresh cherries, and little hint of spicy cedar. The mouth was full of tart pomegranate and orange zest which was followed quite pleasingly with a supple cocoa powder texture including cranberry and almond.  ★  It was lovely with a wood-fired dish of creamy farro, bloomsdale spinach and a roasted egg, accompanied by rainbow chard gratinata, made with cream, nutmeg, and parmesan.  This dish and wine combo really made me reminiscent of what I might end up with at a little osterie in the Langhe…

One thought on “Mavericks”