Note: This entry is meant to follow Renato Corino 2.0: La Vendemmia 2011. You might want to read it before reading this one.

When I was living in Alba last fall, I found out that Antonio Galloni would soon be making his way through Piemonte to rate the 2008 Baroli. He’d be paying a visit to Renato Corino on November 13. And so … I was left with no choice but to invite myself over.

If you don’t already know, Antonio Galloni is Robert Parker’s Italian wine specialist and reviewer — with a particular affinity for Piemonte. In 2004, he published the first “Piedmont Report,” which quickly established itself as the worldwide authority on what was happening with Piemontese wine. Then in 2006 he joined Parker’s Wine Advocate.

I’ve been wanting to meet Antonio Galloni for some years now since we have the same affection for il vino Italiano  — specialmente Piemonte! — and figured it would probably just happen randomly at some Italian tasting somewhere — maybe in San Francisco, possibly in Piemonte, but who knew? Possibly never.

As it turned out, not only would it be okay for me to stop by but, why not just come and taste through everything with Antonio and Renato? 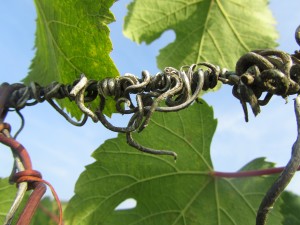 I will admit, I was pretty nervous. I was about to meet the voice, the authority, the worldrenowned director of scores of all my beloved Piemontese vino. I didn’t know what to expect and I wasn’t sure how to conduct myself. I wanted to appear authentically myself but not as star-struck as a frenzied teenager about to meet her favorite rock star. I had to express my enthusiasm while maintaining repose.

Antonio arrived in the Renato Corino tasting room in jeans and hiking shoes, armed with a casual day bag and within it were his laptop, an extension cord, and not much else. I sensed his friendly and down-to-earth demeanor and easily introduced myself, in Italian. After a few words in this way, he assured me we could speak in English but I encouraged him, “No let’s stick to Italian. I learn more about the wines that way.” (Admittedly, we did lapse into English a little when Renato was down getting more wine from the cellar but that didn’t last very long.) For Antonio, Italian just flows off his tongue as easily as English does. To me he doesn’t even sound like an American speaking Italian at all. It’s amazing.

And so … as Renato poured the wines that Antonio had requested for his visit, Antonio wrote his official notes in his computer. And I wrote mine in my trusty journal. And at first, there wasn’t a ton for me to say. I was getting to know the 2008’s, concentrating on what I was tasting, and listening to them. Not only what they said, but what it was they chose to speak about, was interesting to me. I comprehended most everything, and sip by sip, I began to understand the 2008 vintage. If I wasn’t sure about what they said, or I had a question about the wine, I’d ask and they explained. But it all flew by too fast.

I think the 2008 vintage will be a classic one with elegance, good structure, and a refined personality. Antonio seemed to enjoy it and we all remarked that especially, in comparison to how it usually measures up, the base Barolo is outstanding in this year. We also sampled the 2001 Baroli, which, for the most part, were showing really well. I’m not giving stars in this article but I will say the following:

I learned something very important during this time. I’m usually enamored with the Arborina Baroli — hands down — but back as far as 2001, if I were let loose in the cellar, I now realize I’d choose the Rocche or Vecchie Vigne. It’s not like the Arborina was in any way bad, but I think Arborina shines better when it’s fresher and younger (maybe 5-10 years old). The other Renato Corino Baroli are built for a longer haul. We’ll see how I feel about future vintages. † ‡

Arborina 2008. Barolo DOCG. Earth and spice with milk chocolate, strawbery, a touch of mandarin, and cream. Velvety tannins and a bright acidity make this an elegant Barolo.

Rocche dell’Annunziata 2008. Barolo DOCG. Scents of wood burning off in the distance, dark chocolate, and tobacco lead to a palate bursting with red cherries and chalky tannins. Overall fairly supple with Indian spices, black licorice, cherries, and oregano towards the end.

Vecchie Vigne 2008. Barolo DOCG. An elaborate wine. Forest floor, freshly cut wood, tobacco, moss, red cherry, pine, and cologne. There’s a bit of what I used to call a “grappa” smell but I’ve decided it’s more like yellow/green banana peel, which just tells me the wine is still a little “green.” (Vecchie Vigne needs time!) Nevertheless the mouthfeel is soft and bursting with tender fruit. A complex of spices, acidity, and big tannins provide the framework for a long life.

Arborina 2001. Barolo DOCG. At first expressions of smoky incense with some leather. The wine seems shy at first but opens up after a little time in the glass — dried cranberries and cooked cherries come forth with a scent clove. The end brings velvety tannins and a twist of orange peel.

Rocche dell’Annunziata 2001. Barolo DOCG. Fresh leather, wet moss, dried cherry, and smoke aromas create a foundation for this supple wine, full of fresh plums and red berries. Nuances coming forth after being in the glass for a while include: baking chocolate, spearmint, and tobacco. Well-structured; chalky tannins.

Vecchie Vigne 2001. Barolo DOCG. Smells of stewed plums, spiced rum, toast, cedar, and cellar (a mix of new oak and cement). The mid-palate, bursting with lively and bright fruit like raspberry and cherry, builds up to the finish of dark dried fruit (raisins), and a little heat. (The Nebbiolo comes from Giachini cru.)

Antonio asked to try the 2009’s so Renato took samples from the cellar and lined them up in front of us. But after a few cursory sips, without giving them too much time, he departed for his next appointment.

At first glance they did seem fiery and robust. But I realized after just having tasted through the well-aged 2001’s, probably they would. I had tried through the 2009 Baroli on two more occasions and while I think the vintage might be a big one, maybe more jammy in respect to others, it certainly isn’t worthless. The wines are strong, sweet, and tannic all at once.

On the day we transferred the 2011 Pozzo Barbera from vat to barrel (Oct 18), I had the opportunity to try through the Arborina, Rocche, and Vecchie Vigne 2009 Baroli with some visitors and Renato in the the tasting room. I also tried them again blind on November 14, the day after Galloni’s visit. “Blind” only because Renato forgot to label the bottles. But it was fun trying to pick out which was which, neither of us really knowing for sure.

The following tasting notes are from Oct 18 and Nov 13. The dates listed are just the dates I tried the wines but I didn’t write any notes on November 14.

Arborina 2009. Barolo DOCG. An Arborina bouquet of cinnamon sticks, oranges, and milk chocolate. Citrus acidity and tannins that in this moment are a little difficult. (Oct 18, Nov 13, Nov 14)

Rocche dell’Annunziata 2009. Barolo DOCG. Aromas of melting semi-sweet chocolate, cinnamon, and a cedar forest with sweet campfire smoke. Fruity and fleshy in the mouth with velvety tannins in the end. (Oct 18, Nov 13, Nov 14)

Vecchie Vigne 2009. Barolo DOCG. More smoky than other vintages with marked dusty tannins. Luscious and ripe — red and and black fruits. There is a ton of character in this one that hasn’t even begun to be unleashed, not unlike an infant with soft skin and healthy (i.e., loud) lungs. (Oct 18, Nov 13, Nov 14)

* In English: “Antonio Galloni is visiting you guys on November 13?!??? I have to talk to you about Galloni! Can I come by and at least say “hi?” I’ve always wanted to meet him!”

†  At Christmas last year (2011), I opened a bottle of Renato Corino Arborina 2005 Barolo, which was divine! A bit of hickory on the nose with rose, and sweet mulled cider (cinnamon, orange), milk chocolate, and herbs. An unctuous mouth feel with dusty raspberry and cherry. The finish maintains the themes: dusty roses, cedar, hickory, and a bit of chocolate, all framed by those chalky tannins I love. Still really fresh. Perfect.