Leave it to me to go to Napa Valley and only find Sangiovese, Aglianico, and Italian castles! A few weeks ago I spent a long weekend in the Mayacamas Mountains, the mountain range that separates Sonoma Valley from Napa Valley. In the afternoons I ventured down and east to the Napa side to explore some wineries. While I did drink a little Cabernet, I certainly wasn’t rolling around in it, like most people. 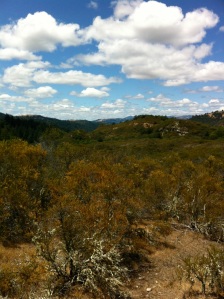 Obviously people usually travel to Napa Valley in search of fine Cabernet. But of course, I have other things on my agenda. One thing I needed to do was find that castle people kept talking about… 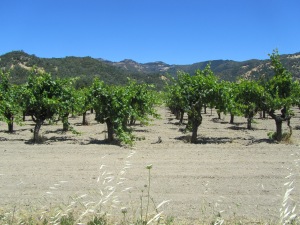 Do yourself a favor and if you do go to Napa, even if you are strictly focused on finding the best Cabernet Sauvignon there is, take an hour to visit Castello di Amorosa — but not for the wine, for the tour!

Dario Sattui, of V.Sattui winery, finished building Castello di Amorasa in 2007, a medieval castle right in the middle of the Diamond Mountain district of Napa Valley. He built it as authentically as he could, consulting numerous Italian Renaissance castle building plans, European builders, and collecting original materials or replicating them as best as he could.

” … We spent years sourcing old materials. Where we couldn’t find authentic handmade materials, we created them by using the same methods and materials of long ago …” – Dario Sattui, Part 6 of the History of Castello di Amorosa on the website

After 14 arduous years, ten of which were spent building the underground part, the castle was finished. In total, the castle is 121,000 sq ft, including 80,000 sq ft of underground space. Below ground are four levels of tunnels, passageways, cellars, and 80 separate rooms. The rooms are diverse in function and size and are designed to replicate what one would find in an actual medieval castle. There is a torture chamber with an actual late Renaissance Iron Maiden, imported from Germany.

Another underground room is a grand ballroom with three-story tall ceilings. In fact, the ballroom is such a magnificent space, Pixar decided to host its crew party in that very room this past June, celebrating the release of the movie, Brave.

” … We constructed a dry moat, high defensive fortified walls, five towers, courtyards and loggias, a Tuscan farmhouse and other outbuildings. We erected archways, a big kitchen, a Great Hall that took one and a half years to completely fresco. We built stables, and apartment for the nobles, wine fermenting rooms, a church and chapel, secret passageways and even a prison and torture chamber. I was bent on being totally authentic incorporating every element of a real 12th – 13th century Tuscan castle. I attempted to depict how castles evolved over time, by erecting doorways and niches and then bricking them up. We built a partially destroyed tower …” – Dario Sattui, Part 5 of the History of Castello di Amorosa on the website

During my visit I focused on the Italian varietal wines: Pinot grigio, Pinot bianco, Sangiovese, Barbera, etc but didn’t like any of them. They make a lot of wine, though. I’m sure something in the mix is good enough (probably a Cabernet or Merlot) but none made themselves known to me. The grandeur of the castle was enough. It is a serious work of art and a reflection of someone’s true passion and heart. 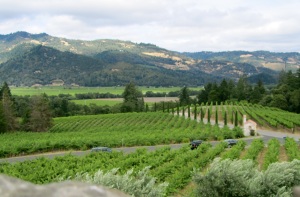 Anyway, you don’t have to go far to find good wine in Napa, for sure, and I knew where I could get a good bottle of Sangiovese. About five minutes down the road is a little farmhouse (compared to that castle, it is tiny!), in the northern part of the St. Helena appellation. It’s called Benessere. (Benessere means “well-being” in Italian.)

With 20 minutes to spare between appointments, I popped into the Benessere tasting room, hoping to taste and pick up a couple of bottles. When I walked in to the TR, the guy working there said, “Well here comes the sun! You look like you’re on a mission!”

I looked behind me to see if someone bright and sunny and on a mission had followed me in but no, no one had. He was talking about me! “Well, yes I am actually. I wanted to see if you had any Sangiovese or Aglianico open today,” I replied.

“Why yes, we do.” So I explained to him that I only had a couple of minutes and he happily poured the Pinot grigio and Sangiovese for me. The Pinot grigio, from two spots on the Napa side of Carneros, was impressively crisp and the Sangiovese true to variety character, as I remembered. I’ve had 10+ year-old versions of this wine in the past; it ages surprisingly well.

The guy working was happy to open the Aglianico for me too. When I tried it, I said that I appreciated that it maintained that ashy character and dark blackberry fruit like an Italian Aglianico, even though it’s not grown on the volcanic soils of Campania, but instead comes from right here in Napa. I guess those were the money words. He ended up sending me off with the bottle — gratuito (free of charge)!

I still would say I like the Amador Foothills Aglianico 2007 better, but the Benessere Aglianco 2009 is nothing to scoff at. It’s dense and rich with chalky tannins and plenty of interesting nuances. Maybe it just needs a couple more years. I give it ★☆ — ★★. (Their website has good technical info if you’re after it.)

The next day I stopped at Luna because while eating at The Cheesecake Factory (not the finest of restaurants but it’s easy to find yourself there late at night sometimes) in years past, I was startled to find that there was another winery in Napa, producing a great Sangio! Luna is a gorgeous property on the Silverado Trail and their wines are good overall. They make Pinot grigio, a couple of Super Tuscan type blends, Cabernet Sauvignon, Merlot, etc., but my favorite remains the Sangiovese, hands down.

So last weekend I put the Benessere and Luna Sangiovesi head-to-head, along with a third: a regular ol’ easy Rosso di Montalcino, for comparison’s sake. I was spending a long weekend in Lake Tahoe with friends and volunteered to be in charge of dinner one night. The original plan was pizza but that changed.

And so! It was a good thing because in case you ever had any doubt, yes, Sangiovese is the perfect wine for a California summer barbeque. (Skip the Zin next time!) It matches perfectly with grilled Santa-Maria-seasoned Tri Tip, and grilled tomatoes, zucchini, and summer squash. Throw in some sun-dried tomato pesto for good measure and you’ve got yourself a happy bunch of friends. 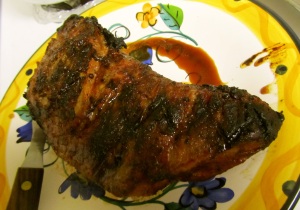 Fattoria dei Barbi Rosso di Montalcino 2009. Rosso di Montalcino DOC. Sangiovese 100%. Cherry and fruitcake in the nose with a little metallic/mineral character. Pronounced acidity with citrus but lush on the palate and better with the food than the two from California. The California Sangiovesi, below, have more ripeness, fruitiness, and see more new French oak, which lends vanilla undertones. The Rosso is aged 6 months in French barrels and stainless steel. ★★

Benessere Sangiovese Estate 2008. Napa Valley (northern part of St. Helena district). Sangiovese 100%. Black cherry, chocolate, coffee, and touches of green moss make up the bouquet. It’s a smooth wine, with not a ton of heft in the body. There is a pleasant herbal quality: mostly oregano. This wine has denser and darker flavors compared to the other two, but is still pretty light and fruity on the palate. Aged in new and seasoned French oak barrels, puncheons and upright tanks for 12-15 months.  ★☆

All three wines were finished but the majority vote was that the Barbi Rosso was the best (with the best price: $20-24). Luna came in second ($25), and the Benessere, while still really good, third ($28). Fortunately for Ital-o-philes like me, the Italian wines of Napa are still the underdog and priced way below those inflated Cabs. More for me!

… I had forgotten that Benessere also makes Sagrantino. Now I know what I need to try on my next visit to Napa!

2 thoughts on “Italian Castles and Wines —in Napa Valley!”