Well, I have been focusing on southern Italian reds like I promised. Dreams of traveling to Puglia, Basilicata, Campania, Calabria, and Sicilia … dance in my head, but so do dreams of touring Yellowstone National Park, hiking through the colorful canyons of Utah, exploring Machu Picchu of Peru, and doing some serious wine tasting in Chile. However, if I skip an October in Piemonte I will never hear the end of it. But that, of course, makes me happy too. Such is life.

I will get to those other places, though. And not before too long.

In the meantime, in my funky little central coast beach town of California, where finding southern Italian reds on a daily basis is an issue, well, I am finding them. It’s just that around here, you find mostly budget ones. While it’s great to find wines in the $8-13 range, they’re not always worth the money—ironically. It’s a mixed bag from the south of Italy (in this I am including Sicilia) and I worry a little about what they are sending to the US or what importers are choosing to import. But all in due time. I have faith that this could be a burgeoning category for the casual to professional eonophile—as long as we don’t end up with too much schwag over here.

I recently picked up a bottle of $14 Poggionotte Nero d’Avola and I have to say, was not impressed. The only thing that impressed me, even a little, was that it was more drinkable on the third day open than on the first day. On the first day, I couldn’t drink more than a few sips so I left it in case “a miracle occurred.” On the second day, the smell of sheep derriere went away but it still was not awesome—at least not as awesome as a $14 wine from Sicilia should be.

Poggionotte Nero d’Avola 2011. Sicilia IGT. Nero d’Avola 100%. From the first day, I had nothing more to report than smells from a zoo. My first set of notes came from the second day that the bottle was open: black licorice and blackberry syrup come forth but there is still a hint of something pungent in the background. On the palate it is bitter, thin, and spicy. By the 3rd day it was actually almost good: rose and red licorice nose. On the palate, it’s okay; nothing much going on but the finish is pleasing with spices and fresh red fruit. On the 4th day open, it was more drinkable than on the first day open but I didn’t finish it. I would not recommend this wine to anyone.

I also just picked up a $10 Cusumano Nero d’Avola. I didn’t have high hopes after cracking tha Poggionotte but actually, this one impressed me. 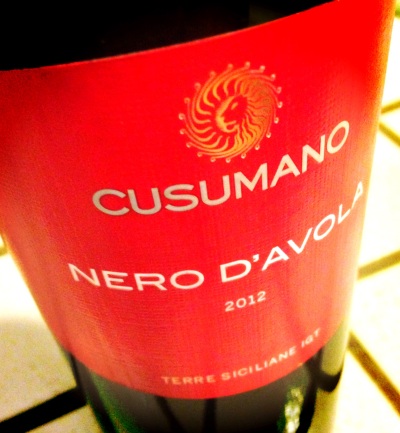 Cusumano Nero d’Avola 2012. Sicilia IGT (San Giacomo, Butera (CL)). Nero d’Avola 100%. Two days cold maceration on skins (destemmed); ML in stainless steel with lees contact for 5 months. On the nose there is black licorice, blackberry, cassis, ash, violets, and every so often a little waft of cinnamon Red Hots. The palate is a little thin but the finish is spicy and fruity. This wine offers no resistance; it’s easy drinking and pleasant. For $10, I give this wine one ★.

Tomorrow I’m to attend a Sagrantino tasting in San Francisco and I’m really looking forward to it. Sagrantino is from Umbria, which is in central Italy. But for now I give myself credit for exploring this region a little more, especially since Umbria is south of both Piemonte and Toscana. I’m sure there will be some knockouts there; I’ll be sure to keep you posted.