I managed to sneak a few treasures into my suitcase from my last trip to Piemonte.

I also came home to a few unexpected ones.

Two packages sat on the floor by the front door when I walked into my house after being gone for nearly three weeks—my 15th trip to Italy in 10 years. One I knew: a prAna order I had placed. The other made me wonder: a heavy, padded envelope from Workman Publishing in New York City.

In my foggy jet-lagged stupor, I went to the kitchen and took the box cutter from the drawer. I picked up the envelope but worked delicately, remembering that I didn’t know what was inside. I slowly pulled the package open and delight washed over me—an official galley proof of Karen MacNeil’s Second Edition of the Wine Bible, to be published in October 2015. Oh yeah! She had said she’d send these to us. 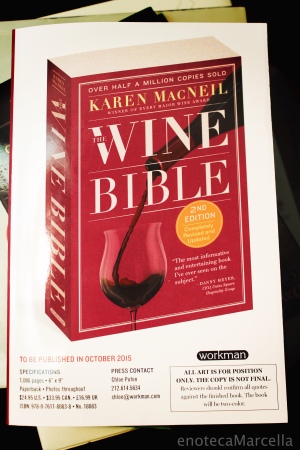 The sight of it took me right back to the Wine Writers Symposium in Napa last February, to the dark Vintners Hall at the CIA. There Andrea Robinson, Karen MacNeil, and Jancis Robinson tag-teamed a presentation entitled, “The Importance of Branding Yourself.”

While they all introduced relevant and useful topics, Karen MacNeil’s story affected a personal chord in me. I’ve been meaning to share it with you all.

I had only just met Karen the day before. I saw an open spot near her place setting at lunch, and set my things down in the seat next to hers. Why not? The first thing I noticed upon seeing her (I must admit) was the graceful way in which she—a redhead—wore red.

It was as simple as that.

I had sworn the color off since my youth, learning that “redheads can’t wear red,” and went along believing it until that day in February when I saw the grace with which Karen did. Her long, wavy, red hair flowed beautifully around her refined, red tunic and classy, red-rimmed glasses, as if they had all been destined for each other.

It’s always weird later in life when things turn you upside down. But it can be refreshing. It doesn’t mean I’m going to start wearing red—quite the contrary. Her presence simply reminded me that we—as individuals—can do whatever we want. But we’ll only do it right if we are true to ourselves. It might sound cliché but it’s true. The next day, in her presentation, she proved that to me. A few of the most fragile parts in her path to success really spoke to me.

Karen ran away from home at the age of 14. Not long after, she ended up in New York City with a mere $6 in her pocket. She managed to talk her way into a room at the Y on the first night, and within a couple of days, lined up three part-time, low-end jobs. With an unrestrainable desire to write professionally, she spent the next few years wading through about 300 rejection letters before landing her first assignment. The story was about butter, in 1976.†

Fast forward to now and she is “the only person in the United States to have won every major wine award in the English language,” which is practically enough in and of itself. But on top of writing the Wine Bible, one of the most recognized reference books in the industry, her list of contributions to the wine world seems endless.

I don’t know that I’ll ever author a book that will sell close to a million copies, write for the New York Times, or host a television series, like Karen MacNeil, but I’m not here to compare myself to her. My point is sincerely that I relate to her and she is a great inspiration.

I didn’t exactly run away from home at age 14, but I did leave my mother’s home in central Texas for my father’s bachelor pad, in Santa Cruz, California. My goal was to get to college. By age 14 I knew enough about it to know that if I could become a resident of California again (I was born here), I would be guaranteed admission to college in the state—somewhere. And college in California was very far away from any chances of ending up a single mom, living off of food stamps and welfare in a duplex with house full of kids in the suburbs in Texas, which is how I grew up.

UC Berkeley accepted me and I received my fair share of financial aid. I also held many part-time jobs throughout the four years to keep me afloat. After graduation, I worked three jobs simultaneously to save for graduate school. One of my jobs was as a server at an Italian restaurant. That is where I fell in love with Barolo and where my wine story begins.‡

There were multiple steps, but a few landmarks and turning points have led me to where I am today. My first year at Bonny Doon Vineyard (2004-2005) exposed me to nearly every Piemontese variety there is. Back then Randall Grahm was not only growing them in California, but importing a few esoteric ones as well (Ruchè and Erbaluce to be precise). I became part of a tasting group and threw myself into every learning experience I could find. That little bit of knowledge, along with my father’s death that summer, was enough to get me on a plane to Italy in October of 2005, to find out what this land they called “Barolo” was all about.

Fast-forward five years, a handful of trips to Piemonte, and I started this blog. That is where my wine writing career starts. I didn’t go to school to be a writer (although I did write a 100-page thesis for my Master’s Degree); I simply started writing about Italian wine because I couldn’t NOT write about Italian wine. Karen admitted that she had never taken a writing class either in the beginning (although I think she took many later in her career and I’ve certainly been to multiple writing conferences by now).

A couple of years after starting this blog, I pitched my first story idea to Sommelier Journal: an article about Timorasso and Colli Tortonesi. It was accepted. But the acceptance I attribute neither to luck nor talent, but because I followed my heart. The subject inspired me beyond belief and the universe knew that.

I certainly haven’t gotten every story accepted since then. But I have noticed that when I’m really excited about a subject, it has a better chance of getting printed. I’m lucky for this because last year, in the four months immediately following my mother’s death, I had four article deadlines to meet. I somehow pulled those off, all on time, and well. Most of the subject matter was close to my heart so I could do it.

But sometimes I really ask myself why. Why do I write about Timorasso and Nebbiolo, or Schioppettino, Erbaluce, Corvina, and Zibibbo for that matter? Who cares? Is that going to get me more hits on my blog, an award of “Best Wine Blog,” or more published wine articles? Why do I run off to Italy every five minutes? Why would I drive through sleet and snow or hike and run up hills through the thick mud to understand how a vine grows? Or why a wine tastes like it does? Why am I so endlessly inspired by farmers who get animated and opinionated, talking to me about their philosophies until 10pm at night when they haven’t had dinner yet (and neither have I)? On top of that I have so many questions about the barrels and the soil and so many inquiries about maceration times, de-stemming, and time on skins …

Have I gone the wrong way? Am I crazy? Am I running to something? Am I running from something? Shouldn’t I have stopped and had children by now? Has my behavior led to all of this time alone? Dinner by myself? The dissolution of my 16-year relationship? Is this the new path? Or is it a mere stepping-stone?

When mother’s day arrives and I have no one to call, father’s day comes and all I hear are echoes, and dinnertime shows up  e v e r y d a y  and I have to solve the problem on my own, again, I wonder, what is the message? What is the world trying to tell me?

But then I find myself in l’Ermite on the top of Tain l’Hermitage, or running through the ancient cellars of Burgundy with my friend, Caleb.

Then there I was traveling through Walla-Walla with these like-minded folk.

The waterfalls of the Columbia River Gorge mesmerized me and the Willamette Valley made me feel welcomed. 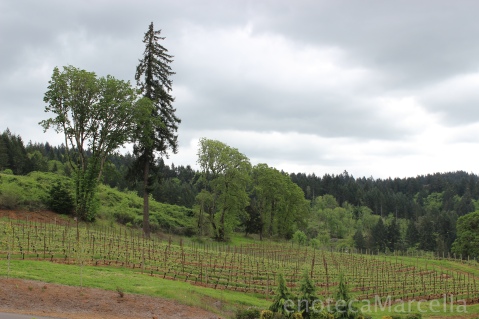 I have new twin nieces—my bother’s daughters—who are a joy to behold. And a sister who is there any time for me: day or night.

There are parties at home with friends I’ve known for 20+ years and even a shared bottle and conversation into the night with the man who used to be in my life every day. (How lucky is that, that we are such good friends?)

[Why haven’t I taken pictures of these lovely people?]

Then the invitations to Italy arrive. Someone wants me to assess the new-release Nebbiolos and then return for the wines of Collio … A dinner occurs where I am the guest of honor on the hill of Perno with these beautiful souls, who care about my wellbeing beyond belief for some reason. All the while, this spectacular view of Serralunga d’Alba hovers above us.

Suddenly on the last day of my most recent trip (just a week ago), I am at the post-Barolo Boys Tasting festa in the center of Monforte d’Alba. I discover that not only do I know, and am friends with, practically everyone there, but the coolest part is that I am with my buddies from Denmark who I randomly met three years ago during our simultaneous visits to Domenico Clerico. Even though I haven’t seen them since last year, it’s like we were hanging out just yesterday. Now, through their importing company, SoloNebbiolo, they bring a unique and estimable portfolio of Piemontese producers to Denmark. (I’m jealous!)

Finally I return home after my three week trip. Exhausted, after 24 hours of travel, I walk in the door. What’s there to greet me is the galley proof of Karen MacNeil’s second edition of The Wine Bible, with an enclosed letter that says, “I’d be so appreciative if you’d review it, and spread the word. Gratefully, Karen.”

And I think, “Well, I must have taken a right turn somewhere.”

† That was the year I was born!

‡ I did finish graduate school—paid my way through that as well—and received a Master of Science degree in Epidemiology, a public health degree. I worked for a year in that field but my heart wasn’t in it. Fate led me back into the wine industry.