I really could have waited to open this. But I was making my favorite Friulian appetizer and the bottle was yelling from its resting place, “me, me! open me!” So I did. 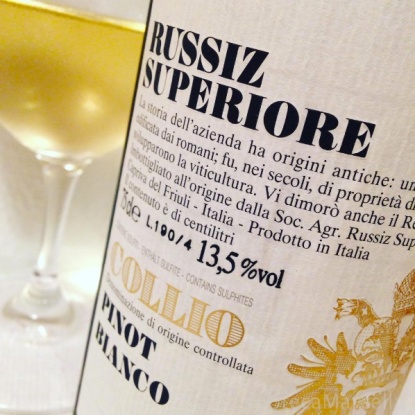 Marco Felluga Russiz Superiore Pinot bianco 2013. Collio DOC. Pinot bianco 100%. A beautiful, deep, transparent, gold color. It smells of dandelions, lemongrass, beeswax, and honey. The palate is clean but unctuous and juicy with ripe mango, stone fruit, and vanilla. The finish is bright, focused, and fresh.This wine honestly has another 20 years of life left in it—easily—but I also absolutely loved it now! As well as on the second night … and the fourth!★★☆

There is nothing complicated about this Friulian bruschetta (besides finding the correct cooked ham†). The most important thing to know is that it is super delicious, especially when paired with a crisp Friulian white, preferably from the Collio DOC. To make it, all you do is spread a little bit of butter on a nice quality French bread, lightly toasted or fresh. Then mix up pureed horseradish with sour cream (to taste‡), spread a bit of that on top of the buttered bread, and then top with a thinly sliced cooked ham or raw prosciutto, and arugula. Wash it down with any white from Collio: Pinot bianco, Pinot grigio, Friulano, or Ribolla Gialla all pair deliciously!

The taste of the wine and the bruschetta together sent my mind straight back to Collio. The last time I was there (summer 2015), the Marco Felluga estate invited our group of international journalists to its Russiz property for breakfast and a tour of the vineyards and winery. 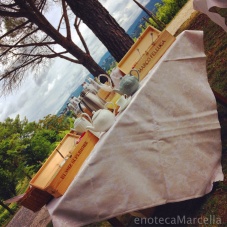 We tasted a nice lineup of special wines, including (if my memory serves me correctly!) a 1984 Pinot bianco, which even at over 30 years old, was still enjoyable! While the vintage stamp had worn off with part of the label, we could still partly make it out—though sadly that part did not make it into my photo! (The “75” refers to something else.) I knew the wine I had brought home with me—the 2013 Pinot bianco—must have a great deal of life in it, judging from the state of this one. But … sometimes I just cannot wait. 😉 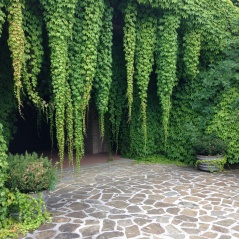 The Felluga name extends over a handful or producers in Friuli and it can get confusing. Brothers Livio Felluga and Marco Felluga split in 1956 and the two estates have been operating independently since then.

You may have also seen the Livio Felluga wines and not realized they are different.

Roberto Felluga, son of Marco (who was 88 years old at the time of my visit in June 2015), is now in charge of running the Marco Felluga winery. They hold 100 hectares, spread over four locations in Collio: Cormons, Russiz, San Floriano, and Oslavia. The Russiz estate alone is 50 hectares. Under the Marco Felluga label, 80% of the production is white wine and 20% is red, which is standard given the Collio is really known for its whites.

The Marco Felluga wines are consistent in quality and expression of their territory—always worth experiencing! I suggest you go find some!

† At my local butcher, I buy a ham called Danish ham. It is cooked but isn’t salty like a lot of sandwich ham in the US. Prosciutto will work but I prefer the delicate flavor and texture of the Danish ham, or the ham in Friuli of course. You can see that pictured in the breakfast spread in the vineyard. My photo of the appetizer includes half Danish ham and half prosciutto.

‡ I’ve read a few different recipes for this. Some claim it is just straight pureed horseradish; others add ingredients. In US markets, I have found that it can be hard to find pure horsradish without sugar and vinegar added. In Friuli I found the spread to be creamy and spicy (not sweet or tangy) and the best way I’ve found to replicate that is to add a little sour cream to the pureed horseradish.