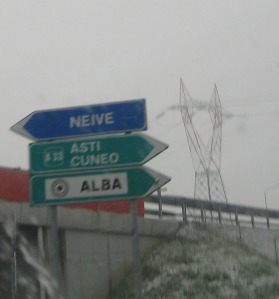 Last December I visited Italy for the fifth time.  Every time I go I rent a car (except for my first trip), and thus subject myself to the driving culture of Italy.  To me, driving in Italy is kind of like getting on a roller coaster that I know will scare me to death every time, but I still love it, and I want to go on it again and again and again.  Driving in Italy is stressful and challenges my way of thinking but strangely I don’t hate it.  This trip I realized that I must have something to learn from my mysterious intrigue with this manic rush called “driving in Italy.”

Last December, on my first (freezing) morning in Piemonte, with barely any semblance of one night’s sleep under my belt, I found myself in my little red Peugeot rushing off to my first winery appointment at a winery I’ve been to before – twice!  But I got lost.

Now I’ve driven in Italy enough times to know that getting lost is all part of the “fun.”  But when I’m within the situation (late, hungry, cold), and don’t know my way out, fun is the last word on my mind.  It’s all about problem solving.  And NO I do NOT have navigation!  I’m a fan of the good old fashion map.

In the U.S., a map serves me well.  Most city streets follow a grid pattern of right angles and they have one agreed-upon name and people know it.  There is an understood process of following streets in a progression and a certain logic of going forward, turning right, left, or sometimes turning around.   Some people use written instructions, some a map, but either way, the process is the same.  I use a map because I like to get the big picture, make a plan, and follow it.

In Italy, a map, as much as I hate to admit, is practically useless.  Most cities are laid out in concentric circles and the roads between them wind around like cooked spaghetti.  “Intersections,” like I’m used to, don’t really exist at all.  I just go until I end up in a round-a-bout and then I have to make a decision based on all the signs, and go with it.  There’s no stopping.  There’s hardly any concept of turning right or left because once you’re in the round-a-bout, every turn is a right turn.  It’s a matter of whether it’s going to be the first, second, third, fourth, or fifth one.  The third right might end up being the “left,” but I can’t think like that, or I will end up stressed out and lost for sure.

Turning “around” isn’t the same in Italy.  Once I realize I don’t know where I am, and I don’t know where I went wrong (was it in the last round-a-bout, or three prior, and which turn should I have taken?), I can’t turn “around.”  Turning around… and around and around (in the round-a-bout) is pretty much all I can do until I read all the city signs and decide in which direction my next move should be.  While driving in Italy, I’ve learned to get a general sense of where I need to end up, know which towns I might pass through on the way, and just wing it.  I can make a plan but chances are, it will be wasted energy.

The only way to get anywhere in Italy in one piece is to just keep going, trust in the temporal nature of things, follow the signs, and hope that if I don’t end up where I thought I was headed, hopefully the other place will be interesting, fun, and full of more surprises than I could have planned for. 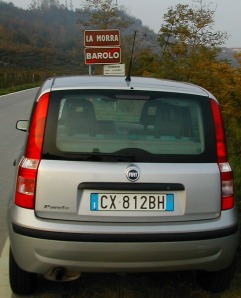 What I’ve come to realize is that I approach situations in life in the same way I use a map here at home in the U.S. to get someplace: gather the facts, chart out a course, head straight for the goal, and avoid distractions.

But that way of thinking doesn’t work all the time, nor does it work in every situation.  My intrigue with the Italian concept of driving has illuminated for me that sometimes in life I might have an easier time getting where I want to be by just going with the flow of things, not stopping, trusting time, and remaining open to interesting distractions.