All it takes is one visit to a winery like Azienda Agricola Roberto Voerzio in La Morra for me to remember that, yes, I am an American.  It’s not like I forgot, and it’s certainly not like I expected anyone not to notice.  It’s just that all I can do now is look back in awe at the visit, peek every now and again at my one beautiful bottle of Cerequio 2005 Barolo taking up a slot in my wine refrigerator here in Santa Cruz, California, and wonder when my next visit might be.

Roberto Voerzio started doing his own thing back in the 1980’s with inherited vineyard holdings (which he shared with his brother, Gianni).  From the beginning what has distinguished him from other Barolo producers is his fanatical vineyard selection and insistence on low yields.  A majority of his Barbera vines (along with some of the Nebbiolo and other vines) are planted a close 50 cm apart, rather than 100cm (which is customary), in order to stress the plants and reduce yields.  As if that isn’t enough he also is a huge fan of the green harvest technique and in the summer cuts each bunch in half (keeping the top half because it is the best part) so that each plant will only produce up to 800g of fruit total.  He employs organic farming techniques and uses indigenous yeasts.  Some light fining may occur but wines are bottled without filtration.  From the 1980’s through 1994 he aged the wines in a combination of large Slavonian oak casks and barrique (usually ~225L French barrels).  Starting in 1995 he moved to all barrique, making him an entirely modern-style Barolo producer.  In 2007 he decided to move a bit back toward the traditional methods and use Slavonian oak again (still in combination with barrique).  In either case, he generally subscribes to a “less than 30% new oak” philosophy for all the wines.  Another interesting detail is that all the wines finish in tank through the summer (when the winery may warm up a tad) in order to check for any reduction which could occur.

What first hits you with this wine are particularly fruity and sweet aromas: red cherry, raspberry (lamponi), and fruitcake but the mid-palate and finish are very dry and all about elevated acid.  Needs a year maybe or some rich risotto…

Very true Nebbiolo color.  Floral and spicey on the nose.  Full and expressive of fruit with balance. Nice tannins; not aggressive(ly dry, like young Nebbis tend to be).  The two vineyards are in the Barolo zone but Voerzio uses these specifically for the Langhe Nebbi only because Voerzio thinks they are not as good as Cerequio, Fossati, Casa Nere (which he uses for the Baroli). The two vineyards and S/SE facing are also are at higher elevation (450m).  ★ ★

On the nose it exhibits the traditional “Bordeaux variety” characters: spicey red berries, a little bell pepper and an integration of oak.  The mid and finish told me this is a wine for ageing.  Vines were planted in 1998; 2001 was the first vintage.  Uses about 50% new oak, with the other 50% three or less years old.  Spends one to one and a half years in oak.  All barrique.

Very light orange/brick.  The nose is full of fruitcake, autumn spice and flowers.  Certainly there is high acid but the lush cocoa-powdery tannins say there is a lot yet to develop in this one.  ★ ★ ☆

A little darker than the 2005.  Also quite floral and spicey finishing with full and chewy tannins.  But since it’s an infant, I can only speculate on what it could become…  ★ ★ ☆

2006 was quite a bit warmer than the 2005 cooler-and-wetter growing season.  Some might consider the 2005 season as more normal in regards to the usual Piemontese climate – large temperature fluctuations and an autumn with heavy precipitation and pockets of hail.  Nevertheless, 2005’s show more elevated acid compared to 2004 and 2006.  That was certainly evident between the two Cerequio.

I went in to that tasting knowing full well that these were expensive wines but I hadn’t really dug in to find out what that really meant.  Some say Roberto Voerzio has reached “cult” status… but I ask myself, “What does “cult” really mean when it comes to wine?  Cult, because the price keeps them so esoteric?”  Maybe.  But the price is justified because obviously Roberto Voerzio is using an extraordinary amount of resources to realize the absolute full potential of these grapes.  I was lucky enough to be gifted a bottle of Cerequio 2005 by our kind and energetic host, Cesare.  Upon returning home, I realized this wine is valued at close to $300 here in the U.S.  And that’s when I realized that I cannot deny my Americanism; I think of everything in terms of money.  “How could I ever repay such a gesture?  I should have given them something in return!  What should I bring next time!?”  Of course I am speechlessly grateful, as I wouldn’t have afforded a bottle myself.  But what I realize is that no matter what, wine is never about “cult status,” it’s about friendship, respecting your land, and generosity.  They obviously understand that better than I do. 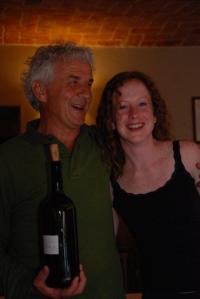