As fate would have it, EnzoBoglietti would be the first winery I’d reach on my cell where someone actually spoke English.  The ironic thing is that no one there actually does; Enzo had answered the phone and handed it off to a visitor, a German visitor at that, who spoke perfect English.  It was the morning of October 24, 2005.  I’d just spent a few wonderful nights in Milano and Torino and my next plan was to get a rental car and head straight to Barolo…  I didn’t know what to expect or where to get the car and I didn’t even have a map.  But it all worked out splendidly.

But this is all too much of story for me to write out here and is better saved for an in-person recount.  I will tell you one thing, though.  It was this amazing winery visit (complete with two Dolcetto, three Barbera, a Langhe Nebbiolo, the ‘01 Brunate Barolo, ‘01 Casa Nere Barolo, and a vertical of ’98, ’99, ’00, and ‘01 Fossati Barolo; hanging skinned animals; men showing up with newly harvested white truffles; and German translators to let me know what was up) that sealed the deal:  Marci’s Enrapture by Barolo.

Every trip to Italy since then I have tried to book another appointment but have had absolutely no luck.  Even though I know some Italian now, and even once spoke French to a woman on the phone there, …still nothing.  It wasn’t until this last December (2009) that I got to visit again because of my friend who booked the appointment. 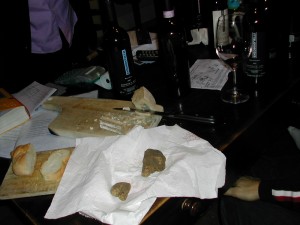 They don’t do their tastings in the same place as they used to.  While the new place is quite nice and modern, I really like the other one better (dirt courtyard, typical Piemontese stone buildings, killed animals hanging about waiting for someone to cook them).  Enzo didn’t do our tasting appointment this time either, although I did see him and he did remember me (“Weren’t you with some German guys?” he said to me in Italian… ha!).  Instead a nice lady poured the wines for us and even if they didn’t amaze me as they did four years ago, luckily I still loved them. 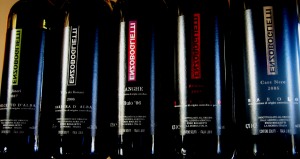 Tiglineri 2007 Dolcetto d’Alba.  The bouquet is more dark spice than the typical Dolcetto but it still has the juicy fruit element, however more of a dark berry and plum character.  This wine is concentrated, almost like a wine reduction used for cooking, showing chcolatey oak, richness, and a still very high acid in the finish, typical of Dolcetto.

Vigna dei Romani 2005 Barbera d’Alba.  22 months in barrique with 6 more months bottle ageing before release.  This was just opened when we tried it and all I got was oak. But Roberto liked it.  (According to my notes I seemed to like the 2001 back during my 2005 visit but even then it wasn’t my favorite.)

Buio (darkness) 2006.  Nebbiolo (80%) and Barbera (20%) blend.  16 months in 60% new barrique with 4 months bottle ageing before release.  The Barbera takes over the color of this wine.  Aromas of roses, perfume, and strong red cherries mingle together. This is a full wine with elegant tannins, a chocolatey texture – a very pleasing integration.  Still a favorite.  ★ ★

Casa Nere Barolo 2005. La Morra.  Only 10 days maceration.  This bottle was really cold and she opened it for us so all I got out of this was oak and spice – a very tight and strong wine.  We joked that maybe if we could just come back tomorrow, we could taste it again.  No such luck.

Arione Barolo 2005.  Serralunga. 15 months in large oak, 15 months in barrique, and 8 months bottle ageing.  15 days maceration.  I have to say I haven’t had many Baroli from Serralunga but what our hostess told me is that the soil there is sandier than in La Morra, making the wine more floral but also more tannic.  Well I certainly found the floral character in this one, with a rich mid-palate and more light red fruits like pomegranate and cranberry.  The finish was highly tannic, however, not in any sort of bad way, more in an offer of structure for things to come.  There is a ton of potential here.  (I also personally prefer these types of feminine characteristics in a Barolo.)  ★ ★ ☆ 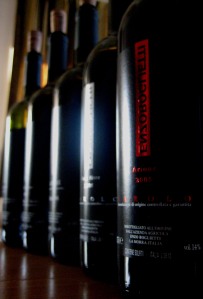 My goal is to do the next visit completely in Italian.  Maybe Enzo would pour for me then. (?)

One thought on “Enzo Boglietti”