My second real wine love was Amarone.  It happened on the same day I discovered and fell in love with Nebbiolo.   But my relationships with these two have played out quite differently over the years.  While Nebbiolo and I have increased the frequency of our rendezvous as of late, Amarone and I have always done better to maintain a bit of a long-distance relationship.  It’s probably because of the grudge I hold against it from that trip we took together cross country back in the summer of 1999.  I splurged on a bottle that I was going to enjoy in my new apartment in Montreal after I finished my first week of graduate school.  Well, it couldn’t take the heat evidently and arrived all sour and full of fits.† It was a totally inappropriate way to celebrate my new accomplishments with me in my new abode.  But, over the years I have worked through these resentful emotions and admit that I still love Amarone, despite our disagreements.

This past July I attended the Society of Wine Educators annual conference in Washington DC.  In my effort to coddle my fragile relationship with Amarone, I attempted to sign up for a session on Amarone’s newly-acquired DOCG status.  In fact, I was really looking forward to it but as it turned out, I had registered too late and it was completely full.  Begging to be let in was not working so I decided I’d just show up, and make sure they let me through the door.  Luckily for me they had scheduled the session on the very last day, in the very last time slot.  So I was banking on many members being overly worn-out and hopefully hung-over from post-session late-night imbibing (which I had not done!).  BAM!  Hit the nail on the head.  I got in!

The following information is summarized from the “Amarone, at long last, a DOCG” presentation given by Geralyn Brostrom, CWE, at the Society of Wine Educators annual conference, July 2010, Washington DC.  The tasting line-up was part of the session. 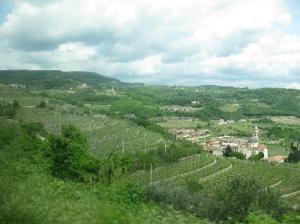 Amaro means “bitter” in Italian and the suffix “-one” indicates something big.  The amaro part doesn’t refer to an unpleasant taste but instead the tart and dry flavors, i.e. not sweet, that characterize this wine.  Since Amarone is made from partially dried grapes, the must has a higher sugar concentration than the must of regular wines which are made from freshly-harvested grapes.  In fact it takes about 1,300 dried grapes to make one bottle of Amarone, whereas a regular bottle of wine takes about 630 grapes.  Amarone, furthermore, is fermented to dryness (usually completely) and so the result is a very “big” wine, with a high alcohol concentration when finished.  Amarone gained its DOC status in 1968 and only this year, on March 24, 2010, did it finally acquire DOCG status, mainly because the wine makers could never agree on all the requirements.  The Amarone della Valpolicella DOCG takes effect with the 2010 harvest.

The hilly area of Valpolicella is located east of Lake Garda and north of Verona in the northeastern region of Italy. 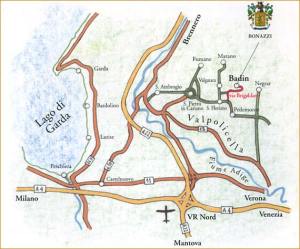 It consists of a repetition of low ridges and short valleys, each with their own stream.  Each of the valleys has its own particular microclimate and therefore contribute to the diversity of characters found in Amarone, and all of the Valpolicella wines.  The classified Valpolicella wines are:

The grape variety requirements for all denominations are as follows:

Typically the wines from the Valpolicella region are limited to mainly three red grapes: Corvina, Rondinella, and Molinara.  Other local varieties that are commonly used include: Corvinone, Oseleta, Croatina, and Dindarella.  Sometimes, in tiny amounts, some other “international” grapes can be added to the blend if grown in the area: Sangiovese, Cabernet Franc, Cabernet Sauvignon, Merlot, and Teroldego.  But recently the Centro per la Sperimentazione in Vitivinicolture has been examining ancient indigenous varieties to see if they might be better blending additions.  These include Castelrotto, Bressa, Spigamonte, Turchetta, and Corbina, among others. More information about these can be found here  http://wineanorak.com/italy/newvarietiesvalpolicella.htm. 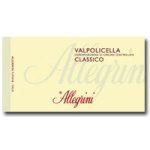 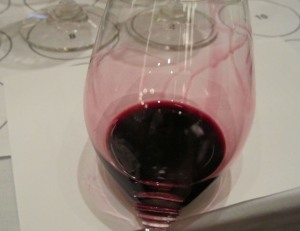 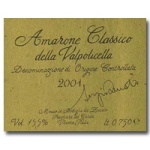 What amazed me most about this tasting were the ranges of flavors and characteristics that are present in the grapes of Valpolicella wines, which I feel extremely lucky to have been able to try through the varietal barrel samples.  I also was awakened to the grapes’ synergistic relationships with one another (furthermore thinking the Valpolicella blend is as indispensable as the great blends of Bordeaux or Chianti).  I intensely respect the wine makers in this area who have worked so hard for so long to discover the potential here.

The diversity of styles and flavors that are coming from variations in blends, locale, production methods, and wine maker experiences and decisions, will keep me intrigued in the years to come.  Amarone, for me is not an everyday drinking wine.  (You will not share this opinion if you’re in the ranks of those who can down a bottle of Zinfandel on a daily basis).  But for me it is certainly a style I have found worthy of the occasional tryst. 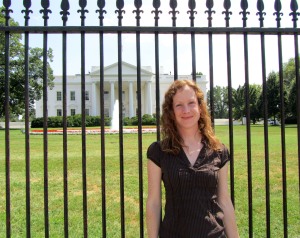 † …and that was my first (and last!) lesson about proper wine storage temperatures.