Finally a California wine with some real tannins! (And it’s not a Rockpile Petite Sirah — because that would be too easy!)

Ooooh, I just love it when these lovely little gems come out of the woodwork and hit me upside the head. Thank you! I needed that!

Well the other night a friend of mine brought over a bottle of Amador Foothill winery Aglianco. Hmmmmm …

I knew they made Sangiovese but how did I not know about the Aglianico? We decided not to waste any time investigating. He opened it and before I even had the chance to pour us all a taste and check it out, he had whipped up some pretty mean crostini to boot: toasted French bread topped with herbed goat cheese, thinly sliced red onion and radishes, and oh of course — his very own duck prosciutto! (Where do I find such talented friends!?)

The pairing was splendid. 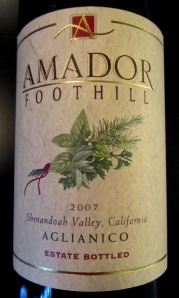 Amador Foothill Aglianico 2007. Shenandoah Valley. Aglianico 100%. A cherry vanilla bouquet is livened up by secondary aromas of moss, forest, spiced rum, and raisins. In the mouth the wine is full but refined by a balance of brightness, earthiness, and grip. Black plum fruit softens a kick of spice and the finish comes around with sweet leathery tannins and cooked earth. Fermented for seven days on the skins and aged one year in French oak barrels. The vines were planted in 2003. ★ ★

Aglianico is a grape “native” to the Campania region of Italy. Some say it came from the Greeks and that’s how it got its name: hellenico or ellenico evolves to aglianico. Others say the Greeks were just the first to domesticate this wild vine native to southern Italy. Nevertheless it does well in the volcanic soils of the higher elevations of southern Italy and typically expresses strong black and red fruit characters, lots of earth, and packs a tannic punch.

The most reputed region is the Taurasi DOCG, in the hills east of the town of Avellino. The DOCG requirements of Taurasi include a minimum of 85% Aglianico and a max of 15% other native red grapes. The wine must be aged for a minimum of three years prior to release with a minimum of one of those years in wood of some sort (large or small barrels).

It has also achieved DOC status in north central Campania in the Taburno DOC and in Basilicata in the Aglianico del Vulture DOC. DOC areas require less aging in general but in all cases riservas require longer. High quality Italian Aglianicos can typically age for an easy ten years, give or take.

The Amador Foothill Aglianico probably doesn’t need ten years for its tannins to figure themselves out but I feel confident that this wine will continue to improve over the vintages, given that even this one, made from very young vines, is extraordinary now, five years after harvest.

While this is definitely my favorite Cal-Ital find as of late, I’d be lying not to say that I was equally impressed by the Palmina Sisquoc Nebbiolo 2005, which I’ll review soon. But for the price ($24 for the Amador Foothill Aglianico, and $50 for the Palmina) the Amador Foothill is a better value. Both are outstanding expressions of Italian grapes on foreign soil, however.