For a little background on the Sierra Foothills Barbera Festival, please read my 2013 entry.

As for 2014, after sitting through harrowing, Friday the 13th, Bay Area traffic—what should have been a three hour drive turned into a five hour drive!—we made it to the Yorba tasting room in Sutter Creek with just enough time to do a little tasting. Last year Yorba was one of my favorite new discoveries, so this year I wanted to start my trip to the Sierra Foothills with a revisit to their tasting room. It would have been nice to spend some time in their modern and naturally designed tasting room but since they allow dogs on their back patio and we had Rama, our two year old Rhodesian Ridgeback with us, we opted for outside. It was shaping up to be a warm early evening, so the patio was perfect.

Turns out, I haven’t changed my mind since last year. While their Barbera is still my favorite, I did also enjoy the Yorba Zinfandel, Syrah, and Tempranillo. Their wines are ripe and concentrated but none are without balance, nor do they lack characteristics true to the variety. It is definitely a winery to check out!

If you read my 2013 report, you will see that last year it was nearly 110°F during the Saturday festival. Fortunately this year, it stayed below 90°F! I had a much easier time.

One major takeaway from the festival is—and this conclusion is actually partially influenced by something they told me at Yorba on Friday—I think most of these Barberas need more time! At Yorba, they hold on to their wines for a year or two longer than most Sierra Foothills Barbera producers. Their current release is 2009, whereas in most cases, the current releases are 2011 and 2012. In many of these younger wines, I tasted a bitter finish. So I’d just be curious to see how some of the two to three year old wines will taste when they are about five years old. Probably better.

My favorites (in order) were the Yorba Shake Ridge Vineyard Barbera 2009, Renwood Barbera 2011, Lava Cap Barbera 2011, and the Amador Foothill Winery Barbera 2012. (There were a couple of 2011 and 2012s that I thought were worth a mention.) Last year my top pick was the Easton Monarch Mine Vineyard 2008 and coincidentally they were pouring the exact same vintage this year. But this year I found it to have a peculiar flavor. So I’m a little mixed on that one. The Amador Foothill Barbera is on the tart side but the coolest thing about this wine is that they are making it without any oak ageing! It is probably the ONLY one in all of California made without oak. Barbera made without oak is common in Piemonte—maybe not the major wines from the major players in Asti and Alba, but historically that is how they made it. In the present day, smaller producers who may have less money for purchasing barrels and/or who feel like the expressiveness of their Barbera is muted by French oak, make Barbera without it. So kudos to Amador Foothill for trying this new/”ancient” method!

Below is my list of top-picks, in order of preference, with very brief tasting notes.

Yorba Shake Ridge Vineyard Barbera 2010. Amador County. Seems a little more bitter than the 2009. Maybe it’s like all the rest that just need time too. 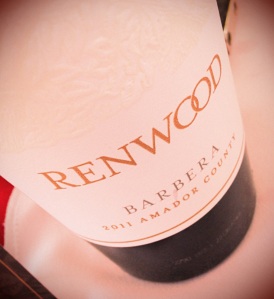 Easton Monarch Mine Vineyard Barbera 2008. Sierra Foothills. Nose is balanced with rich, red cherry, and perfume. The taste is thick, perfumed, and a bit peculiar, with a hint of makeup powder. Interesting in comparison to last year.★ 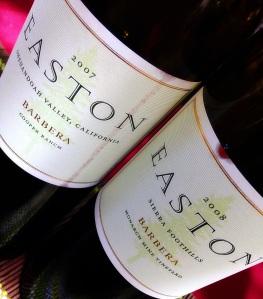 Vino Noceto Linsteadt Barbera 2011. Shenandoah Valley. More acidity in this one, given the cooler year; more like the Asti style.☆ 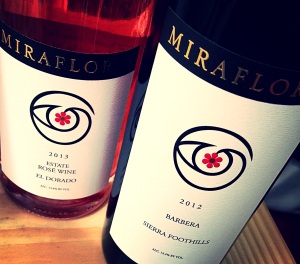 Young’s Barbera 2012. Shenandoah Valley. Dark and juicy. Oak is evident but the wine is still vibrant.★ 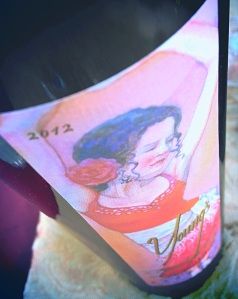 Boeger Barbera 2011. El Dorado. Pleasing sweet aromas; on the palate full of dark fruit but the finish is a little bitter. Needs time.

Boeger Barbera Vineyard Select 2009. El Dorado. Similar to above but better and not bitter.★

Scott Harvey J&S Reserve Barbera (white) 2012. Both of theirs have a distinct eucalyptus and gravel quality.

Scott Harvey Mountain Selection Barbera (red) 2012. Both of theirs have a distinct eucalyptus and gravel quality. I prefer the red label, as usual.