Last Friday some good friends from Napa stopped by and I opened my one bottle of Marengo Pugnane Barbera d’Alba. First sip and suddenly I remember, “Wow, I am totally in love with this wine!” And then, “Oh yeah! I still have not written up my standouts from my last trip to Piemonte …” 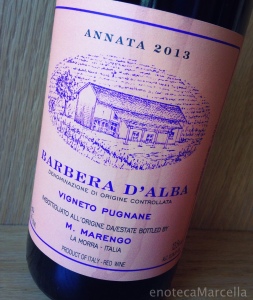 Ooops. But it’s not as if I’ve just been a beach bum all summer (though I have been spotted there) … 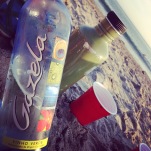 … Seabright Beach & my Ridgeback (on the left, hunting seaweed flies).

In May I spent a week in Alba for Nebbiolo Prima 2015, an international pre-marketing event for new-release Barolo, Barbaresco, and Roero wines; I reviewed those in the Aug/Sept issue of Somm Journal. I filled up a second week with visits to a few of my favorite producers as well as some new ones, as I interviewed them for my piece, “Barolo in the 21st Century” (a realistic snapshot of today’s winemaking techniques in Barolo) featured in the Wine & Spirits Fall 2015 Special Issue.†

After my trip to Barolo in May, I turned right back around in June and headed to Friuli. I began telling you all about my Friulian adventures here on enotecaMarcella with “Orange” Pinot grigio; next up I’ll cover “Orange” Ribolla Gialla. On top of that, I accepted a position as a sommelier at a new wine bar in Cupertino, CA at the beginning of the summer, and have been studying for the WSET Diploma since April.

Now in the last few days of August, I’ve found a little chance to come up for air and would like to take the opportunity to give credit to the following remarkable producers and the gems that they have recently created from their land.

First up is Viberti Giovanni‘s Dolcetto d’Alba DOC Superiore 2013. (Dolcetto from the Langhe hills can acquire the “Superiore” classification if it has a single vineyard designation and is aged for at least one year in the winery prior to release.) I tried this wine with Claudio Viberti in their wonderful restaurant Buon Padre in Vergne (Barolo). Its balance of intensity and freshness completely blew me away. The grapes come from a 1.3 ha plot just southwest of Vergne on a slope that faces north and receives cool breezes from the Alps. Claudio uses a few secret (but totally natural) techniques in the vineyard and winery to extract Dolcetto’s intense beauty and leave its green tannins behind. This Dolcetto starts with aromas of smoky forest and then a whole nexus of others come forward: black licorice, pomegranate, cranberry, and sweet blood orange. Lush on the palate with velveteen tannins, but fresh with hints of mint and minerals, it becomes spicier as it warms to room temperature in the glass. Truly a remarkable Dolcetto! ★★★ 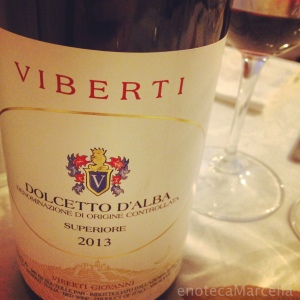 Second are two Barberas. One is Renato Corino‘s Pozzo Barbera d’Alba 2013. It hadn’t yet been released when I tried it in May but probably is now. The brightness inherent in the Barbera grape shows itself clearly while the fruit is a bold dark plum and the bouquet is all violets and spices. ★★★

Mario Marengo‘s Pugnane Barbera d’Alba 2013 comes from a vineyard in the Castiglione Falletto village and as no surprise, it retains some of the particularities of a Castiglione Falletto Barolo: concentrated red and black fruit flavors complement a musky, wet forest element. This Barbera is juicy and full with a clean, polished finish. ★★★

Speaking of Baroli from Castiglione Falletto, Cavalotto‘s Bricco Boschis Barolo DOCG 2010 is one to die for. (Okay, maybe not die, but it’s one to go find before it’s gone—it’s not going to last forever!) Brimming with violets and roses, the palate is full of black cherries, plums, and wild blackberries. It opens and changes, revealing campfire, forest, and sage. Velveteen tannins converge in a clear, streamlined finish. ★★★

I fell absolutely in love with Marchesi de Gresy‘s Gaiun Martinenga Barbaresco DOCG 2008, and I didn’t think that was possible after a week straight of tasting about 100 wines per day at Nebbiolo Prima. I hate that I preferred the one whose taste they describe as “a little more international, as the wine is aged in French oak barriques” but I suspect my preference for it versus the Camp Gros Martinenga (their Barbaresco aged partially in Slavonian oak) will change as the vintages move in and out, as my preferences usually do. The Gaiun makes a great first impression with sweet spice, cassis, red cherry, and cola flavors. While delicate in character, it doesn’t hold back, and maintains a great structure through the finish. ★★★ 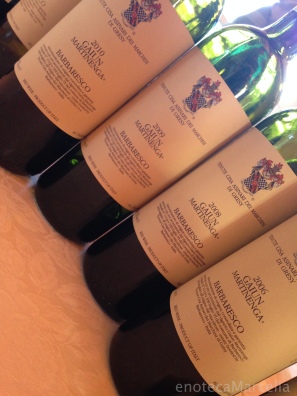 I’m saving the surprise for last. Surprise?—and what is that, you ask?

In the majestic land of age-worthy Nebbiolo, I will admit that one of the very most impressively aged wines I tasted out of close to 1,000 in two weeks, was an Arneis. Yes, a Roero Arneis. Monchiero Carbone‘s Cecu D’la Biunda 2006 Roero Arneis DOCG delights with its tertiary aromas of yellow flowers, chamomile, and a little dash of petrol. Flavors of lemon balm, pineapple, banana, and almond play and dance, while the finish is clean and pleasant.★★★ The 2014 is gorgeous now too (white flowers, vanilla, white peach, pineapple essence)! I advise getting a hold of a few bottles of it—drink a couple now, and stash a couple for 2023! ★★ 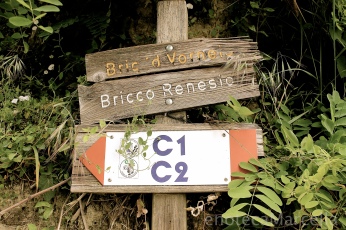 The legend has it that Arneis was discovered on this hill in Roero, called Bric d’Vorneis in dialect … 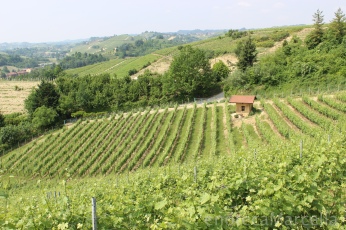 … or Bricco Renesio in Italian. Pictured is one of Carbone’s Arneis vineyards on this hill.

† Wine & Spirits magazine is a subscription-based magazine. If you cannot get a hold of my article, message me and I’ll see what I can do.

2 thoughts on “Summer Standouts of the Langhe & Roero”