Is it possible that I could get tired of Nebbiolo?

Well I never considered such a phenomenon until I awoke on my fourth morning in Piemonte, thinking, “I am burnt out.  How can I get excited about drinking more Barbaresco before today’s first tasting appointment – at 10am!?”

I had barely slept for four days anyway so what did it matter?  “No time to waste Marci; get it together!”  After all, I was here to soak it all up, not rest.  I threw down some bread and jam (which was merely going to act as a solvent for the impending wine), slammed some espresso, and hit the road… 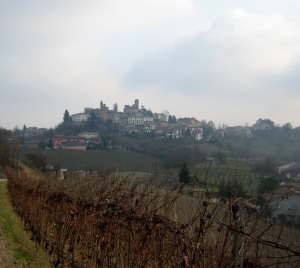 Piero Busso is just outside of the village of Neive in Barbaresco.  It’s nothing flashy – just a good ‘ol Piemontese Azienda Agricola with a connected stucco house and winery, organic courtyard, and an added twist: a greeting dog with a bark like Cujo.   As my companion and I pulled into the driveway, it was painfully obvious that this dog was ready to rip our heads off.  But for some crazy reason (I think we all know what this is) we non-chalantly opened our car doors, as if we didn’t even see or hear the dog.  Just as I was realizing we could be limbless in a matter of seconds …  a cute little blond woman named Lucia (Piero’s wife) entered the yard and yelled some “sweet-nothings” to the dog.  He immediately shut up and then proceeded to check me out, apparently deeming me totally cool because he then walked in many circles, only to sit right down on my feet in a  “Ciao! – Pari interresante! – Ecco-mi! – Coccolarmi adesso!” kind-of way.  (“Hello! – You seem interesting! – Here I am! – Pet me now!”)

After getting past the bipolar gate-keeper, we followed Lucia into the rustic winery, inside a very cozy tasting room complete with the requisite long and dark wooden table, fine Spiegelau glasses, a basket of grissini, and soft white napkins.

Majano 2008.  Dolcetto d’Alba DOC.  Made in stainless steel tanks (acciaio) and rested in stainless for 6 months and 2 months in bottle.  Beautiful bright purple magenta color. Very spicy in the nose with dried strawberries and red licorice.  Full mid-palate with balanced tannins and cloves, more licorice, and raspberry in the finish.  ★ ☆

Majano 2006.  Barbera d’Alba DOC.  Also made in acciaio, spending 10 months in large oak barrels and 6 months in the bottle before release.  Bright ruby color.  I like a Barbera like this with not too much oak, but instead light nutty characteristics integrated with the red berries.  Elegantly floral, finishing with pleasant chocolatey and coffee-like tannins.  ★

Santo Stefanetto (actually now it must be called San Stunet, the original dialect) 2006.  Barbera d’Alba DOC.  Made in acciaio but spends 14 months in barrique plus 6 months in bottle.  Very dark magenta.  Even while noticeably more oaky than the Majano, still showed a great integration of fruit with oak tones.  ★ ☆

2007 Langhe Nebbiolo DOC.  From 15 year old vines in the Albesani vineyard.  They will only make Barbaresco from this vineyard when it is 20 years old.  (Well, I guess Renato beat them to it and has shown us the potential of this young vineyard!)  (https://enotecamarcella.wordpress.com/2010/01/08/cantina-del-pino/) Made in acciaio; spends 8 months in large oak and 2 months in bottle.  A bouquet of almonds, fruitcake, cherries, and roses.  Chalky tannins.  A very fresh wine.  ★ ☆

Mondino 2006.  Barbaresco DOCG.  Made in acciaio; spends 18 months in large oak and 6 months in bottle.  This wine is the color of red bricks.  It’s really young and while I could smell the evidence of potpourri, in still seemed closed.  It was able to show pleasant chalky tannins, which I love, and opened up with some time in the glass to become very perfumed.  ★ ★

Borghese 2006.  Barbaresco DOCG.  Made in acciaio; spends 18 months in large oak and 6 months in bottle.  Showing a usual Nebbiolo orange transparency in the glass, this Barbaresco gives a balance of perfume and oak aromas, is very light and feminine, opening up to reveal ripe fruity characters.   ★ ☆

San Stunet 2005.  Barbaresco DOCG.  Lots of spicy dried flowers, and a little too much new oak, almost evolving into something I often smell but don’t like in Barbaresco/Barolo: rubber.  I haven’t decided if this is from the wine being too young, or if it’s something wrong with the wine, or if it’s just me.  But this one had it in the smell.  Otherwise, this is a bright Barbaresco with fruit integrating into fine tannins and a long lush finish.

We tasted everything but their white and the Gallina Barbaresco but Lucia sent me home with a bottle of that.  This type of tasting is one of the things I just love about Piemonte. 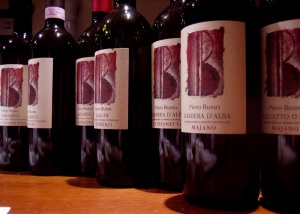 One down; two to go.  Time for a power-lunch:

One bowl of vegetable soup.

One -3oC walk through the village of Neive.

…and on to Bruno Giacosa.

Giorgio Lavagna, the enologist at Bruno Giacosa, conducted our tasting in one of their many buildings in the lower part of the village of Neive.  He poured from “shiners” so I skipped getting any photos.  I was totally wiped out by this time, so I just sat back and listened to my companion, Roberto, and Giorgio converse in Italian, about 75% clueless as to what they were saying.  But I thoroughly enjoyed every wine.  These wines offer a certain refined characteristic, which I can most easily describe with an analogy.  Bruno Giacosa wines are to most Barbaresco and Barolo wines as Paradigm wines are to most other Napa Cabernet Sauvignons and Merlots.  There is something bright and clean going on, a permeating freshness, and an incredible balance of focused tannins, integrated fruit, floral hints, and earth.

Falletto 2007.  Barbera d’Alba.  This vineyard in Serralunga, is comprised of clay and chalk, and has a SW-exposure.  The wine spends 12 months in oak.  (I asked if they used barrique or large oak barrels but Giorgio didn’t seem to understand me.  The brochure merely says “oak barrels.”  I think they use mainly large casks.)  This Barbera looks like a Petite Sirah, with an impenetrable inky color.  It smells of olives, smoke, earth, and blackberry. Great intensity, balance, and a typical acidity.  Very different from all other Barberas I had tried.  ★ ★

Le Rocche del Falletto 2005. Barolo DOCG.  This a Serralunga vineyard with a southern exposure.  In the glass it looked more opaque than I’m used to for Nebbiolo.  Permeating spice with ripe red berries and violets.  Clove comes through with amazing fresh fruit and smooth tannins into a long finish.  ★ ★

Le Rocche del Falletto Barolo is one of those wines that got 100 points for the 2000 vintage by Wine Spectator.  While it had been released at the small price of $170, it now goes for close to $400…

(Furthermore, Screaming Eagle 1997 Cabernet Sauvignon, for which Heidi Peterson Barrett was the winemaker, and is the present winemaker at the aforementioned Paradigm Winery, received 100 points from Robert Parker.  So I guess now I know what these types of wines taste like.  However, you can get about ten bottles of Le Rocche del Falletto for the price of one 1997 Screaming Eagle Cab.  I know what I’d choose!)

Is it nap time yet?!

Nope.  Time for the last appointment of the day.  And wow!  Didn’t I just want to go back to my room and fall asleep!?  But I knew I’d kick myself if I skipped this appointment.

I love these people.  Mauro’s wife, Daniela, is a really sweet woman and speaks English very well so that is helpful for me.  Mauro is also extremely nice but I don’t think I’ve ever been able to exchange more than a handful of words with him.  (Next time for sure!)  The first time I met him was at Osteria Veglio (no relation) in Annunziata on my first night in Barolo in 2005.  I visited the winery later that week and haven’t been able to make another visit since.

So this time it was necessary.  I was in a group with two women who work at La Salita (This is the restaurant I mentioned in my Paolo Scavino review.), and four guys from all different countries.  So that kept things interesting and Daniela poured just about all of their wines for us.

While they are a modern winery (and say they follow in the style of Elio Altare but in my opinion Mauro Veglio wines are way better), they always use indigenous yeasts, and do not fine or filter any of their wines, nor do they use chemical fertilizers or pesticides.

2008 Dolcetto d’Alba. Soured from La Morra and Monforte d’Alba (which is where Mauro and Daniela are from, respectively).  Aged 10 months in acciaio.  This Dolcetto was enjoyable yet a little flatter and hotter than the other I had tried.

2008 Barbera d’Alba.  Sourced from a NE-exposed vineyard in La Morra at 250m, 20-40yr old vines.  A very purple and concentrated wine with a spicy bouquet and a pleasing balance of acidity and smoothness.  ★

Cascina Nuova 2007.  Barbera d’Alba.  From a S/SE-exposed hillside in La Morra (actually in the middle of the Arborina vineyard and planted a very long time ago).  18 months in oak.  More ruby-red than the previous purple-colored Barbera; a very rich and concentrated wine with a fabulous acid balance.  Bright plums and an almost Zinfandel-spice profile.  ★ ★

Arborina 2005.  Barolo DOCG.  From a S/SE-exposed hillside in La Morra (Annunziata) at 250m.  24 months in oak; 8 months in acciaio.  Surprisingly opaque with a richness of color.  Very much feminine spice and rose with a hint of smoke and fresh chalky tannins.  One of my favorite Barolo styles (La Morra) with a pronounced elegance.  ★ ★ 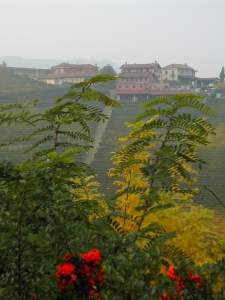 Gattera 2005.  Barolo DOCG.  SW-exposure in La Morra, also at 250m. A 53yr old vineyard.  24 months in oak; 8 months in acciaio.  Warm aromas of fresh stone fruits, with decisive tannins (seemingly produced by the oak).  Fruitier than the rest but still needing age.  (I really liked the 2004, which I’d had before.)

Castelletto 2005.  Barolo DOCG.  S/SE-exposed hillside in Monforte d’Alba at 300m.  Planted in 1967 and 1994.  24 months in oak; 8 months in acciaio.  Warm with dark fruits like plums and blueberries, also eucalyptus and leather.  Astringent and quite strong; not my favorite texture.  (Although the guys across the table from me loved it.  To each his own.)

Castelletto 2000.  Barolo DOCG.  Again same as above but more mature with violet aromas coming out, a citrus character making itself known, but still with a lot of acid and tannin that needs to mellow out.

All of their wines are fermented for short amounts of time in temperature-controlled rotary fermentors.  They use primarily barrique and are moving to allbarrique.  These are two methods which characterize a modern-style Barolo winery.

Needless to say, I didn’t have any trouble sleeping that night.