Scott Harvey is one of my favorite Sierra Foothills producers.  He makes some great Zins and I remember being impressed by his Barberas in the past.  Recently I acquired his 2007 Amador County J&S Reserve Barbera and was excited to open it.  But unfortunately it tasted just like Zinfandel. 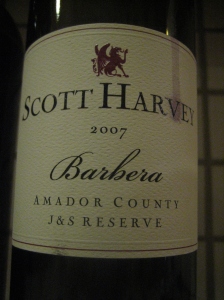 Scott Harvey J&S Reserve 2007 Barbera.  Amador County, California.  Initially this wine smelled just like strawberry jam and boysenberry syrup.  It seemed hotter than the printed 14.5% alcohol.  Some autumn spice was able to show through the jammy flavors.  The berry pie bouquet evolved a little to show some minty and earthy characteristics.  I have to admit it did uphold some tell-tale Barbera acidity.  Unfortunately this wine goes for $30/bottle.

The next night I tried some of what was left in the bottle hoping something miraculous might have occurred overnight.  But I was disappointed.  So figured why not open up the Fontanafreddo Briccotondo 2008 Barbera I recently picked up for $10.99?  There wasn’t much to lose. 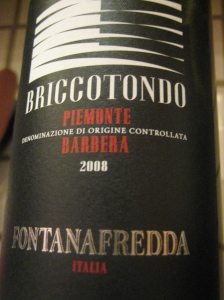 Fontanafredda Briccotondo 2008 Barbera Piemonte DOC.  Imagine sitting on top of a pile of saddles in a horse stable where, in a connected kitchen, someone is baking a cherry–vanilla pie.  Then that person brings the pie to you, you dig in with a spoon and they light a fire in the fireplace.  That’s how this wine evolves in just a few minutes.  The sweet red berry fruit is balanced by acidity and leaves you with a refreshing finish of lime, strawberry, licorice and cedar.   This one comes in at 13.5% alcohol.  ★  (Given the value, this gets a whole star.)

You can find the Briccotondo at Cost Plus and K&L.

Abacela Fault Line Vineyards 2007 Dolcetto.  Umpqua Valley, Southern Oregon.  Dark red cherry color with a transparent magenta rim.  Aromas of orange peel, clove, raisins soaked in rum and brown sugar.  Fruity and overpowering tannins on the first taste, opening over time to mellow tannins and a more pronounced citrus flavor, like limes.  Overall, while not exactly what I prefer in a Dolcetto, it still offered some interesting aspects and a fairly entertaining evolution.  An excellent accompaniment to pizza Margherita.   ($20)  ☆

One thought on “a little domestic Barbera and Dolcetto”