On May 3 this year I was lucky to catch my good friend Renato Vacca during his short trip to California. He and the guys (Joe & Mike) at Enoteca La Storia (ELS) had arranged a vertical tasting of Cantina del Pino Ovello vineyard Barbarescos. This is the only such comprehensive vertical tasting ever done with Renato’s Barbarescos – and I certainly wasn’t going to miss it! 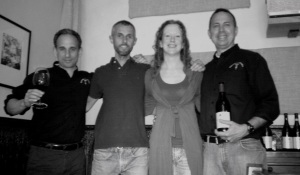 Jeff and I arrived at Enoteca La Storia at the same time as Greg Patrico, Sales Manager at Epic Wines (Renato’s new California importer*), which was a nice surprise because I hadn’t seen Greg in quite a while. The next pleasant surprise was to realize Greg was talking to someone I recognized very well – Randall Bertao, Master Sommelier and Manager at Los Altos Golf and Country Club. Randall Bertao is the Master Sommelier who conducted the service part of my Sommelier Certification exam back in 2007. He’s also the guy who passed me! So I remember him well. He didn’t recognize me (it’s been four years and I’m sure he’s given many exams since then) so I introduced myself. We got to talking and he may have convinced me to work towards taking the Advanced exam – if only I could wrap my head around those dang German wines! (This was a confession that apparently got me invited to an impressive German tasting in San Francisco for the following week.)

But back to the Italian wines …

The Ovello vineyard lies in the commune of Barbaresco at an elevation of 300 meters (1,000 feet), and covers more acreage than any of the other cru vineyards in the commune (of Barbaresco). The vines range in age from 35 – 70 years old, with an average age of about 40 years old. Harvest of all Cantina del Pino grapes are done by hand and all farming practices follow traditional and organic methods, with little intervention in the winery. To read more about the history of the winery, you can find a summary in my first Cantina del Pino blog entry from January 2010.

When we got the go-ahead, about 30 of us filed into the private room at ELS, said our greetings to Renato, and took our places at the long table, among no less than 180 glasses of Nebbiolo. The private room at ELS is impressively filled with materials (copper siding, piping, marble, etc) imported directly from Italy and authentic pieces from Joe’s family. So in such an environment and with the scent of Piemontese wine filling the air and the Italian language flitting about, I was able to pretend I was back in Piemonte for just a bit. I also got a great seat – across form my husband, and next to both Randall and Greg.

After a brief introduction from Renato, we eagerly started to taste our six wines, one by one …

(At the end of each wine description I state whether the year was cooler or warmer and give the wines my preference rating (instead of rating with stars like I usually do)).

Ovello 2001. Barbaresco DOCG. Somewhat opaque, brick color. Smoke, earth, dried cranberries, strawberry jam. In the finish, lots of acid and a touch of iron/metal, showing its age, but not in an offensive way. Cooler year. (#6)

Ovello 2002. Barbaresco DOCG. Darker opaque, brick color. Mint, ripe cranberries, smoky, dusty, a touch of vinyl. This one showed a great structure – good tannins in the mid-palate. The finish: dusty with a pleasing acidity, making me think of a tasty, ripe tangerine. Cooler year. (This one is a fabulous wine. We all know respectable winemakers will only release wine from “bad” vintages if they can make something great, and Renato did.) (#3)

Ovello 2004. Barbaresco DOCG. Most magenta color of all. Spice, cinnamon, and herbs (oregano) in the nose. Full cherry and strawberry primary fruit and a marveloous balance of floral qualities, acidity, and chalky tannins. This wine leaves me wanting nothing more, except to take another sip. Well-integrated; perfectly balanced. Cooler year. (#1 – my favorite)

Ovello 2005. Barbaresco DOCG. Ruby red in color; clearest besides the 2006. A lot of vanilla, pine, wet herbs, a touch of something I smell sometimes that I can only describe with the word, “grappa.” It’s a somewhat starchy smell – neither good nor bad, just there sometimes. I haven’t yet figured out where it comes form. In this one I get a good amount of mint and pine, also the canonical Ovello balsamic. The 2005 showed the most evolution in the glass. Seemingly a little more full-bodied (hotter) than the others. Warmer year. (#4/5)

Ovello 2006. Barbaresco DOCG. Clearest wine of the bunch; the color is a pleasing pink, like the flesh of a good watermelon. Fruitiest in the nose – the characters haven’t had the time to grow up yet and figure themselves out. Tons of fresh strawberry, a dash of pure maple syrup. In the finish, a light acid, sweet limes, and an appealing essence of maple again. Cooler year. (#4/5)

Ovello 2007. Barbaresco DOCG. This was an unexpected addition to the tasting; it is one of the collection of wines about to be released. Somewhat clear, magenta-pink. Spicy, juicy, aromatic, busting forth with floral aromas, violets, pot-pourri, and dried cherries. A baby – I can’t wait to squeeze it again soon. (Actually this is looking to be an extremely approachable vintage and I am really looking forward to exploring the Barolo and Barbaresco from ’07. They don’t strike me as simple and ripe, but graceful, floral, fleshy, and delicately layered – a vintage that makes you stop, search, and ponder.) Warmer year. (This one is not in the ranking because it came later, as a surprise. ★★ ☆.)

The next week, at the exact same time slot, I found myself in San Francisco at the German tasting I mentioned, surrounded by about 200 very fine German Rieslings. But I admit, I would have gladly welcomed the opportunity to try some of my favorite Piemontese ones – from Vajra, Germano Ettore, and Braida. I guess I just know what I like!

And since we’re on the subject of Cantina del Pino wines, and all of the new vintages are due out any second, I should take this opportunity to review Renato’s current selection (as of October, 2010).

In the fall of 2010 when I was traveling in Italy for 10 weeks, I was fortunate to be able to spend two weeks on Renato’s estate. During such time I was able not only to meet many locals whom I would never have been able to meet otherwise, but also people from all over the world, both visiting and living in the area. On this particular day, I hosted a couple from Boston through their visit to the winery and I was able to taste through all of Renato’s current vintages myself. October 21, 2010 also happened to be the clearest day I’ve ever seen in the Langhe. That afternoon I took a panorama of Barbaresco while standing in Ovello, which you can find here in this blog entry Got to Keep on Moving.

Dolcetto d’Alba 2009. This vintage is a dark and inky one. Renato knew last April I’d like it and he was right. One thing I appreciate about Renato’s wines, and it’s really evident to me in his Dolcetto, is how expressive of a vintage they always are, yet they retain his distinctive style. In the nose I get lots of fruitcake, (when I use this word, I’m talking about traditional American fruitcake made with dark dried fruits, carmelized sugars, autumnal spices, cherries, toasted nuts, and a reminiscence of rum aromas. I make them myself every Christmas with fresh ingredients so the smell always becomes evident to me – probably in place of what some might call marzipan). Also strawberries, pomegranates, raspberries. It’s bursting with concentrated fruit which harmonizes with the tannins present and innate to the Dolcetto grape.

Barbera d’Alba 2008. This one gives me more pine and smoke than I recall in other vintages. Either way, it is an enjoyable quality. These lovely foresty bouquet characters frame the way for the fresh mouth-full of crisp red berries and a bright finish. My personal favorite still remains the 2007 but that could totally change any time.

Langhe Nebbiolo 2008. Clear ruby color. Raspberry and smoke in the nose, an unctuous mouth feel, and chalky, chocolaty tannins to boot. Then a twist of floral and feminine qualities in the end.

Barbaresco 2006 & 2007. This is a good time to explore the differences in vintages. To me the 2006 is gentler and more ethereal whereas the 2007 has more of something to tell you. Both are perfumey, have a lot of ripe and spicy red fruit but where the 2006 gives fresh oregano, raspberries, and a touch of cedar, the 2007 offers smoke, riper red fruit – maybe plums, dark autumn spices and chocolaty tannins.

Ovello 2006. Brick in color. Comparing the Ovello to Albesani is more of a horizontal lesson – one which I enjoy with Renato’s wines. I hope he entertains his consideration of making another single vineyard Barbaresco soon from another of his vineyards, when the time is right, of course. Ovello is the gal where Albesani is the guy… smoke, lamponi (raspberries), balsamic, mulling spices, cinnamon, and even with all the tannins, it reminds me of raspberry pie. In my notes I wrote, “rich enough to include a piece of crust.” I think I was getting at balance. The minerality and slight salinity (as in any classic Barbaresco) give this wine its elegance and structure upon which good fruit can shine.

Albesani 2006. Dark Ruby in color. Smokey with sottobosco (“underwoods” fruit, i.e. straberries, other berries). Baker’s chocolate and mint bouquet. No lack of fruit for sure and offering the chalky tannins I love, and which tell me I can certainly age it. A little dark roast coffee in the end. This one is brown eyes, whereas the Ovello is blue.

Looking forward to the next round … 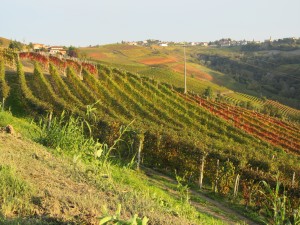 * I am more than pleased to see my suggestion for Renato to go with Epic Wines has turned out so well. I knew it would.