Vinitaly doesn’t overwhelm me like it used to. Now that I’ve been there three times and I speak (good enough) Italian, the major challenge is keeping myself focused, alert, energetic, motivated—and sober—all day long for four days straight of sampling, analyzing, inquiring and writing about, searching for, and taking photos of wines. I tell myself I have to take advantage of where I am and not spend too much time in Padiglione 9, Piemonte! I know Piemonte; I need to get over to Pavilion 2 and try some Sicilian Nero d’Avola or to 7a for some Magliocco from Calabria, … or Greco di Tufo from Campania down past Pavilion 6 … 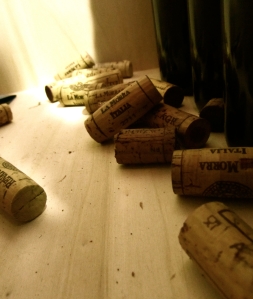 Well, I did all that and more, but in between I stayed in my comfort zone, visiting lots of friends in P9 Piemonte and found some time to wind down. Plus! I did have some important items on my agenda in Piemonte, one of which was to find out what the 2008 Baroli are all about.

Some of my friends are producers in the La Morra commune of the Barolo region, and thus so are lots of their friends. (The Piemontese don’t move around much!) A couple of producers I know very well are Renato Corino and Mauro Veglio, and also their famous neighbor, Elio Altare (but not yet as well as the other two). Close in proximity to these guys, both in Barolo and at Vinitaly, are Fratelli Revello, Mario Marengo, and Giuliano Corino. I just met the latter three at Vinitaly this year and tried their wines for the first time. (Seems ridiculous because I’ve passed all their wineries at least 8 million times. But I’m a firm believer that things happen when they’re supposed to.) Since I know this corner of Barolo the best, I thought I’d introduce the 2008 Baroli with a focus on i cru di La Morra.

I mention Elio Altare here mainly because he has had a tremendous influence on winemaking in La Morra, and certainly on the producers in this entry, some more than others. Elio Altare‘s family moved to La Morra in 1948, to a five hectare piece of land covered by both vineyards and orchards. Elio began to learn about winemaking and became curious if the producers in his region could make better wine than they already were. He ventured out with some friends to Burgundy in 1976 to get a different perspective. After that trip Elio decided to clear room for more vineyards on his land, and to use French oak barrels (barrique) instead of the large casks that they had been using for years in Piemonte. Even though his actions went unsupported by many, he fortunately kept on with what he believed. Now it is possible to understand, even after tasting a handful of wines from a few producers, that he has positively influenced many winemakers’ styles and obviously continues great success at his own estate.

While the line dividing traditional and modern continues to blur in Barolo, I see that everyone’s main goal is the same. One could call the producers addressed here decisively modern because they do the green harvest in the summer, use new French barrels, shorter maceration times, and some, rotary fermenters, … etc. But regardless of the exact production details, the goal among them has always been to maintain respect for the land and the customs of their families, while producing pure, distinctive wine of the highest quality possible. That is the tradition.

There are some variations but for the most part, all of the Baroli reviewed below have been aged for 24 months in French oak barrels, 50% new and 50% second passage and a further year in bottle. The producers have some differing views about maceration methods and times but for the most part they are short—maybe a week or two but nothing verging on 30 days or even close. I’ve divided the wines by cru vineyards in order to compare the wines made from the same vineyard in basically the same method but by different producers. The only main differences are the nuances of the winemaker: when they decide to harvest, their exact plot in the cru, exactly which kinds of French barrels to use, maceration and fermentation times, and whatever other magical powers they might possess.

All in all there’s a big floral component in the 2008 Baroli. But I also detect a strong framework, unlike the 2007’s. It’s a firm vintage that is not shy about tannins. You don’t have to hunt for the fruit underneath all the chewy stuff like you might with some of the 2006’s but it’s not throwing itself at you like the 2007. (I like the 06’s and 07’s but I think I might like the 08’s better. Regardless, I appreciate the differences and I’m merely trying to make comparisons for the sake of explanation, not judgement.)

Allora! Let’s see what I found within my blur of Vinitaly.

(Note: I put in the Renato Corino 2008’s where they fit in below. While I had them at Vinitaly, my notes are from November when I tried them with Antonio Galloni. Also a few others I didn’t try at Vinitaly but afterwards on March 30. Details are below.) 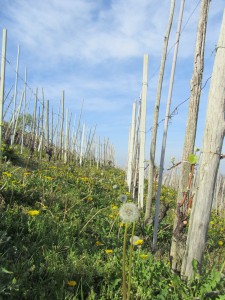 Mauro Veglio Barolo 2008. Barolo DOCG. Intense flavors: cherries, plums, and licorice with lots of spice and rose. Balanced and elegant with a deep concentration of fruit. ★★★

I was really impressed trying through all of the Corino wines but I neglected to write much for notes. I remember Giuliano’s wines to be focused in style, quintessential examples of location and vintage. I’ll have to catch up with him again in the fall and augment these notes. I did give stars, however.

Renato Corino Arborina 2008. Barolo DOCG. Earth and spice with milk chocolate, strawbery, a touch of mandarin, and cream. Velvety tannins and a bright acidity make this an elegant Barolo. (November 2011) ★★★

Alessandro Veglio Gattera 2008. Barolo DOCG. An up-and-coming Barolo producer and one to look out for. Centered in the hamlet of Annunziata, he now makes a single cru Gattera Barolo (2008 is the first to be released), which to me is his best wine yet. Perfumed with roses, cinnamon, cherry but this one shows a definite Gattera character—always a touch of something like stone fruit, raw almonds, and dank herbs. He uses about 20% new oak in general. ★★ 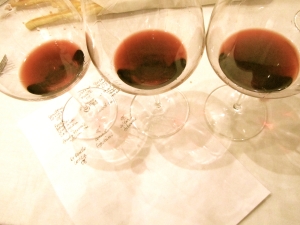 Corino (Giuliano) Vecchie Vigne 2007. Barolo DOCG. Nebbiolo coming from Giachini cru. A decisive citrus element with ripe strawberries and a strong bouquet of roses. Quite an exquisite Barolo; all characteristics align well together. A solid framework let’s all the nuances play. Beautiful now and I’m certain will age for years and years to come. It is aged two years in 80% new and 20% used oak. ★★★ 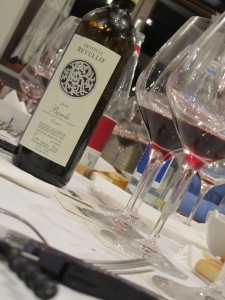 I am kicking myself now for not writing any notes when I tasted through his wines. At Vinitaly, however, you can’t do everything. Sometimes it’s better just to form a general impression of a winery by tasting through everything and making a decision afterwards. Or at least that’s what you can tell yourself after you’ve lost focus. However, if the wines surprise you, or awaken you, you know they are worth focusing in on at a later date. That’s what happened to me with Mario Marengo‘s wines. Extraordinary: expressive, graceful, focused, fresh… He will be one of the first on my list for a proper visit in the fall. There wasn’t a questionable wine in the batch. And! his cru Baroli come from a couple of my favorite vineyards: Brunate and Bricco delle Viole. (For aging his Bricco delle Viole he uses 30% new oak.) Both 2008’s were great and his Barolo Vecchia Vigna Brunate (2006?) blew me away. A perfect wine: supple tannins, dark spices, and a density of black fruit arrive in perfect alignment. His Nebbiolo d’Alba also comes from Valmaggiore (same place in Roero as Sandrone‘s) and I could taste and smell that for sure: vanilla, flowers, strawberry. Overall I give all the wines ★★—★★★.

The opportunity to try even more 2008 Baroli presented itself to me on March 30 after an amazing Burgundy tasting da Renato Corino. A dinner followed the tasting, prepared by certainly one of the best chefs in the Langhe, Bruno Cingolani of Dulcis Vitis in Alba. While I did finally decide I am fond of Burgundy after that tasting, I still prefer the flavors and structure of Barolo—hands-down. Always. With this dinner we enjoyed a tasting of 2008 Baroli.

Once I got the view of what was going to be cracked, and I still had three glasses at my disposal, I knew I was going to have to divide and conquer. 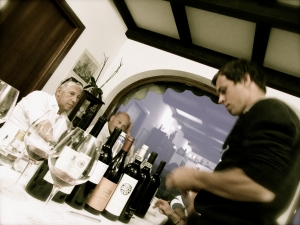 (Well okay, make “flights.” But after 18 Premier Cru Burgundies, I needed a strategy.) First I poured the Sandrone Le Vigne, Marengo Brunate, and Enzo Boglietti Brunate side by side. I was sitting right next to Luciano Sandrone so I got to interogate him about his wine. Le Vigne comes from four cru: Ceretta (Serralunga), Conterni (Monforte), Merli (Novello), and Vignane (Castiglione). It had a ton of gorgeous fruit but the tannins were rough. I’m sure it just needs time. When comparing the Marengo and Boglietti Brunati, I found the Marengo to be sweeter, rounder, with a large quantity of spices where as the Boglietti was more smoky and intense. They both had an inherent balance—already. After that I poured the Revello Conca alongside the Corino Giachini and Altare Arborina because all of these are more delicate Baroli. The Conca was the most delicate whereas the Giachini the most feminine and classy and Arborina, well, dignified and harmonious.

I noticed the Clerico Pajana (Monforte d’Alba) and so stuck that head-to-head with Renato Corino‘s Rocche dell’Annunziata. I was glad I did because these can compete with each other. Alongside any one of the others, both would have clobbered the contender.

And as if that wasn’t enough! (My good friend, Jordana, said to me as I recounted the story, “Wow! Those guys really know how to party!”) 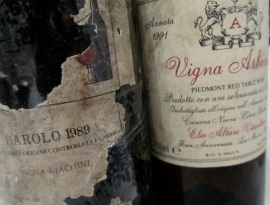 Both the Corino Giachini 1989 and Elio Altare Arborina 1991 will astound you if you can find the chance to enjoy them now, further proving that modern versus traditional doesn’t mean much, and certainly not much to the question of aging potential. It’s the location, grapes, and astuteness of the producer that create a magnificent wine, both in its youth and old age.

I like to imagine un po’ di magia is involved as well.