The Nebbiolo vine is just not that successful on international soils. It can’t compete with blockbuster grapes like Cabernet Sauvignon or Syrah, which seem to have found a little place to hole up in all corners of the globe’s wine regions. No one is writing books or planning tours around “Napa Valley” Nebbiolo or “Barossa Valley” Nebbiolo. No one is selling New World Nebbiolo on a global scale. Nebbiolo from outside of northern Italy hasn’t made it to the big time like some of its other Vitis vinifera counterparts. No. Nebbiolo is finicky and stubborn, and thus prefers to stay close to home, like a true Piemontese. 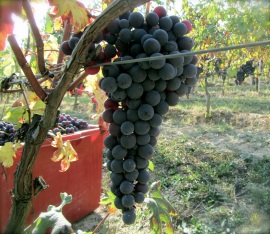 But that hasn’t stopped people from trying to grow it. While most prolific in Piemonte, you can find it growing in other locales around the planet, just not very much, and certainly not as successfully. The best wines from Nebbiolo come from the Langhe, the part of Piemonte where Barolo and Barbaresco are located. Also, very close by is Roero, where the quality of Nebbiolo continues to improve every year. Ghemme and Gattinara, two regions farther away, but still in Piemonte, churn out pretty Nebbiolo wines but they don’t enjoy nearly the same reputation as those from the Langhe. Nebbiolo spots the hills of the rest of Piemonte, spreading out into Valtellina in Lombardia and into Valle d’Aosta, but in none of these places does it attain the prestige that it does in the Langhe.

Then of course, there is America, where we always want in on everyone else’s business. So naturally Californians try growing it. There is some in the Pacific Northwest and a few adventurous souls have even planted it in Virginia! Other countries where you will find Nebbiolo, although I wonder how good it could possibly be, are Switzerland, Mexico, and Australia. (I’ve had a bad one from Switzerland but never had an opportunity to try one from Mexico or Australia.)

So why hasn’t Nebbiolo yet enjoyed much fortune beyond the Langhe hills? Well the Langhe Piemontese have over 700 years of experience with it. They have grown up with Nebbiolo at their sides from generation to generation, and learned all of its little idiosyncracies. The first documentation of Nebbiolo cultivation occurs in the Langhe in 1303, in Pier de’ Cresxenzi’s Ruralism Commodorum.

But if other wine grapes have travelled far from their homeland with success, why hasn’t Nebbiolo? Is it that Nebbiolo has only flourished in this one teeny-tiny little area, and nowhere else over the centuries because it needs absolutely everything the Langhe has to offer — no less, no more? Or is it just so successful there because the Langhe Piemontese have so much experience with it?

I wish I had the answer but I don’t know for sure whether Nebbiolo can only be truly great when it comes from Piemonte or if the rest of us have just had too few years with it to make it into something equally as wonderful. I don’t think the answer will come to anyone anytime soon, until many, many years of growing this vine in the New World — maybe even hundreds. I don’t know if I’ll even live long enough to find out.

In the mean time, I continue to promote and defend Nebbiolo from the Langhe (not that it needs so much help — the wine speaks for itself). From my perspective the Langhe is like the Fertile Crescent of the wine world. It all starts and ends there. But I will admit that I do enjoy a good Nebbiolo from the Gattinara, Valtellina, Valle d’Aosta, … and yes, even California. And I sure would love to try one from Australia or Mexico. (Virginia? Well, as they say, “don’t knock it ’til you try it.” So, sure.)

But why would I want to try these others if I am already convinced of the best? That is because the only way to truly appreciate wine is to keep an open mind. If I remain equipped with an open mind and keep tasting and comparing, I will evolve and change and come to better understand all wines. Comparing wines made of the same grape from different places, producers, vintages — or different vintages of one grape (or blend), locale, or producer — or different wines from the same locale, producer, or vintage, etcetera — are the very best ways to understand any one type of wine more fully.

When my tasting group decided on Nebbiolo as the theme for our next meeting, and wanted me to pick out all the wines, my plan developed quickly and I set out on my hunt. My goal was to equally represent the best Nebbiolo growing locations of Italy, while comparing to what us Californians know best: our own stuff.

I knew we’d be about ten people, give or take, and I’ve found that with a group of this size, about ten wines are the maximum upon which anyone can truly focus before the conversation starts to turn particularly erratic. So for ease I decided to create three flights of three, making the selection limited to nine wines. 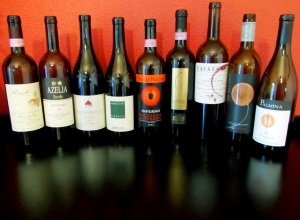 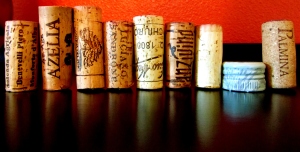 I couldn’t get a hold of anything from Mexico or Australia (and I seriously doubt we have any Swiss Nebbi for sale on American soil). I hadn’t yet heard of this crazy Virginia Nebbiolo and so I set out for a couple of top-notch California Nebbioli, one from Washington, and the rest from the most important Nebbiolo locations in Italy.

Palmina Sisquoc Vineyard Nebbiolo 2006. Santa Ynez Valley. Nebbiolo 100%. A surprising purple-magenta color; not completely translucent; a little cloudy. This Nebbiolo has the most elaborate and ethereal mix of aromas compared to any other domestic Nebbiolo I have ever tried: smoke, sweet strawberry pie, moss, evolving to delicate rose aromas. It’s quite dusty, tannic, and tart but really opens up and mellows out. Excellent cherry fruit and young chalky tannins. Needs a couple of years in the bottle or at least an hour in a decanter — althought personally I like to follow the evolution in my glass if I can make it last long enough! ★ ★ ☆

Bonny Doon Vineyard Ca’ del Solo Nebbiolo 2006. Monterey County. Nebbiolo 100%. Pink-magenta; clear. Compared to the Palmina, this one is a lot fruitier smelling: juicy raspberry with cinnamon and oregano, opening up to give an essence of violets. While fruit forward, there are tannins to speak of and a lovely floral quality. ★ 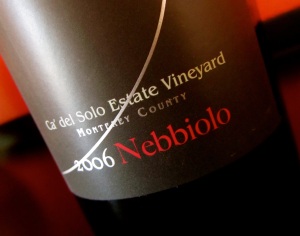 Cavatappi Maddalena Nebbiolo 2005. Yakima Valley, Washington. Nebbiolo 100%. Most of the group thought this one was an old world wine but I think only because it did not have a fruity bouquet. I found it a bit vegetal in the nose, a sign that it was on the decline. But this wine carries through with an impressive structure and elegance throughout the palate. It maintains a tartness, freshness and holds together with good tannins. While I don’t care too much for the nose, it does change and at different times, gives off a variety of scents: herb, hazelnut, clove, licorice, strawberry, vanilla, orange peel, and metal. ★ ☆

Flight #2: Italian Nebbiolo that is not from the Langhe 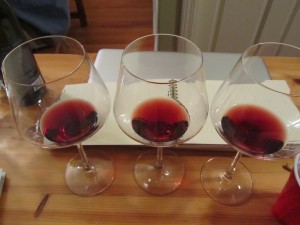 Anzivino Gattinara 2005. Gattinara DOCG. Nebbiolo 100%. Garnet color with a lot of rim variation. Roses, cherries, stones, perfume, hibiscus, and faint smokey scents. A feminine wine: light and dusty tannins with ripe fruit and lots of pot-pourri and cinnamon. An impressively nuanced wine; the best Gattinara I have ever tried. ★ ★ ★

Sandrone Valmaggiore 2009. Nebbiolo d’Alba DOC. Nebbiolo 100%. Ruby red. On the nose coffee and dark plum fruit obscure the qualities I’m used to in a Roero Nebbiolo. This one is more serious with a concentrated cherry jam fruit, a touch of marzipan, perfume, and medicinal herbs. It’s a bit tart but I think with a few years that quality could evolve to a prettier and more refreshing quality. ★

Flight #3: Barolo and Barbaresco, the best Nebbioli of the Langhe

Cantina del Pino Ovello 2007. Barbaresco DOCG. Nebbiolo 100%. (Barbaresco township) Garnet color. Balsamic, strawberry, mint, and musky perfume. Sweet red fruit needs time to ripen in this classic wine. As usual the Ovello could strike the drinker as too harsh, acidic, and tannic but it just needs time to turn all that power into something more polished. I had a little left in the bottle for over 48 hours. Tasting it the next night, and night after, I found it just kept getting better and better. ★ ★ ☆

Azelia Bricco Fiasco 2007. Barolo DOCG. Nebbiolo 100%. (Castiglione Falletto township) Deep garnet-purple. A tightly wound yet fleshy wine. It does what every Barolo should: impress and evolve with its delicate nuances but challenge. Great balance and harmony is achieved with a nexus of cocoa, black coffee, moss, cellar floor, mineral, violets, and mint aromas. The mouth is velveteen and the finish mouth-watering. ★ ★ ☆ 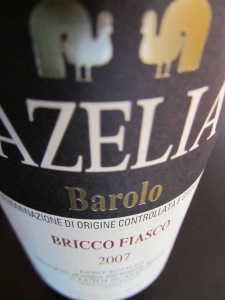 Benevelli Barolo 2007. Barolo DOCG. Nebbiolo 100%. (Monforte d’Alba township) Made from Ravera, Mosconi, and Le Coste cru. Deep garnet-purple. A hefty and tannic wine but again, since it’s a 2007, it becomes magically approachable. On the nose I get a smoky cherry quality with black licorice, medicinal herbs, cinnamon, clove, and potpourri. Tannins are not overly harsh but rounded out by dark plum and blackberry fruit and lifted by a pronounced floral streak. ★ ★

I gave the Cantina del Pino and Azelia both two and a half stars, but for different reasons. While the Cantina del Pino was not very approachable upon first being opened, I know this wine and I know it develops gorgeously over time so I wans’t expecting it to be likeable right away. The Azelia was, however, likable right away. It was a favorite in the group. While it is certainly an outstanding wine, I have no idea how this one will age and develop and I’d wage bets the Ovello will last longer. As for the Benevelli, it also showed as a quality Monforte 2007 Barolo should but I felt the Azelia was a little more layered, and therefore gave it a half star less. For more on how I assign stars, see my article, My stars (Le mie stelle).